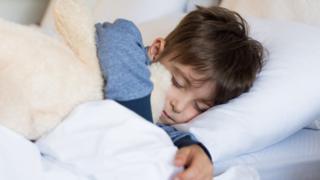 Most young children fail to wake up to the sound of a standard smoke alarm, a BBC investigation has found.

BBC Watchdog Live carried out a test on eight children aged between 16 months to 10 years old.

Only one out of the eight children filmed by the consumer programme showed any sign of being woken by the alarm.

Firms selling alarms should make it clear that they might fail to wake children, parents said.

In the BBC’s test, the only child who woke up got out of bed to get a teddy before going back to bed and falling asleep.

The manufacturers should make it clear that the alarm isn’t guaranteed to wake up everyone in the house, said Jo Leigh, the mother of two of the children who slept through the alarm during Watchdog’s test.

“It is absolutely essential that the packaging makes parents aware that the smoke alarm might not wake your children up,” she said.

Fire investigator Dave Coss from Derbyshire Fire and Rescue, in conjunction with the University of Dundee, also carried out testing on 644 children and found that only 28% woke up to the standard alarm.

The packaging on smoke alarms does not carry any warning about children potentially not waking up, despite research demonstrating that some children do not respond to standard alarms.

“If there’s a label on the box saying a standard smoke alarm might not wake up your children, then all of us can do something about it and have a better plan, should something awful like a fire happen in your home. It’s simple,” said Watchdog presenter Steph McGovern.

A solution to the problem is a smoke detector that combines a high-frequency alarm to wake adults, with a separate device placed inside a child’s bedroom that uses a voice warning – which studies show is much more likely to wake them.

Watchdog tested one of those devices on the same children and six out of the eight did wake up.

In March last year, a fire tore through Karen and Jon Martin’s home while they and their two children were fast asleep. At around 1a.m. the smoke alarm went off and the couple could see smoke and flames downstairs.

“I would have expected with the commotion and the smoke detector going off, that they would have heard it, but they were both fast asleep,” Karen said.

The British Standards Institute said it was aware of the research into the challenges of waking children. It said it already suggested that alarms should be packaged with extra advice for families on the importance of an effective fire escape plan.

“We not aware of conclusive evidence from fire statistics to show that the current frequency of sound emitted by the majority of smoke alarms is ineffective,” the BSI said.

“For those concerned or those with impaired hearing, low-frequency sounders have been available for a number of years and can be connected to many models of a smoke alarm.”

You can watch the full investigation on Thursday 12 September at 20:00 BST on BBC One or on iPlayer afterwards.