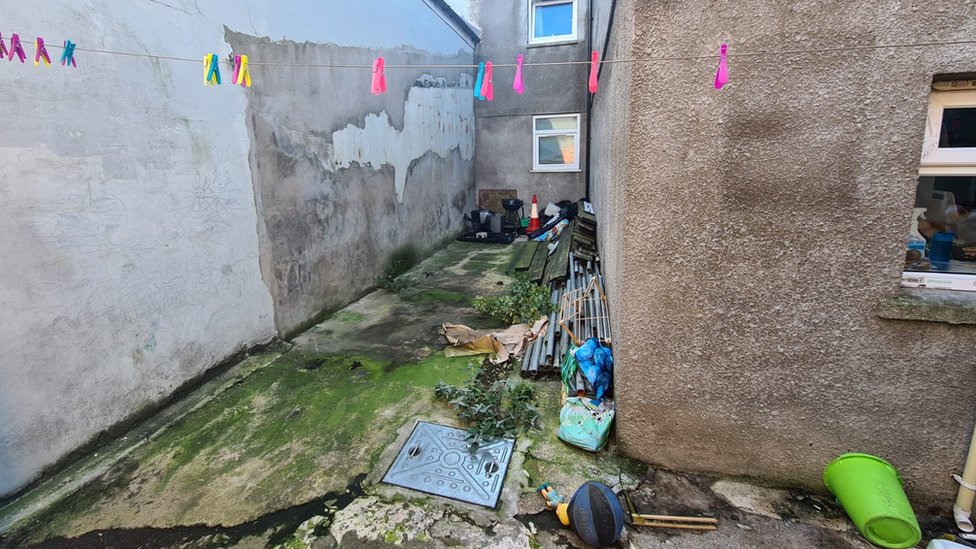 For more than six months, Sarah Wheddon, her partner Chris Hill and five children have been living in a privately rented one-bedroom flat, with a garden like a “prison cell”.

Lockdown was “murder” she said, with everyone “on top of each other”.

They have had some support from Shelter Cymru, which says Covid-19 has exposed “huge inequalities”.

The Welsh Government said social housing was a top priority and it had invested £2bn in affordable homes.

Sarah had not long become a first-time mother when mechanic Chris’s eldest child Ashanti, 15, came to live with them.

His three other children came later, just before lockdown.

“I love them all to bits like they were my own. But I didn’t expect to have them all under the one-bedroom flat roof,” said former hairdresser Sarah.

Their ground floor flat in Grangetown, Cardiff, has two main rooms – the bedroom and the sitting room – and then a small bathroom and kitchen.

“We’re counted as severely overcrowded or homeless,” the 29-year-old said.

The older children sleep in the sitting room – Ashanti and her 12-year-old sister on the sofas, the six-year-old on a “foot rest”, and the nine-year-old on the floor.

Sarah and Chris’s two-year-old girl is currently in a cot in her parents’ small double bedroom.

Ashanti finds the situation claustrophobic – and has exam stress on the horizon.

“I’m not really getting that much sleep when I’m heading into my GCSEs now. It’s kind of hard for me.”

“I don’t really have much room to study – there’s not really any rooms I can do my studying in.”

They do not have enough seats for everyone, and someone has to sit on the floor to eat.

Outside they share a dark “grubby and slippy” concrete back yard with other flats.

It is home to piles of scaffolding poles and planks that do not belong to them, and they could hardly go out this summer because of a wasp nest.

Sarah no longer has a paid job because she suffers from chronic pain condition fibromyalgia, and their childcare costs would be unaffordable.

She said she was worried about the impact of such an overcrowded environment on the children.

“It’s been hell. It’s not fair on the kids at all. It put a lot of strain on the family.

“They’re not sleeping properly at all. It’s affecting their schoolwork as well. Their personalities are changing because of it because they’ve got no space.”

She said there would be no way they could isolate from each other within the house if one of them fell ill with coronavirus.

Shelter Cymru has carried out a survey which it said showed how poor-quality housing affected people’s health and made it harder to avoid the virus.

They have now called for 20,000 new social homes to be built over the next five years.

Jennie Bibbings from the charity said children had been among the hardest hit: “It is appalling that so many people are living in poor-quality housing which is affecting their mental health and making it harder to avoid the virus.”

Cardiff council said there was high demand for “good quality and affordable accommodation” in the city, with limited availability of larger family homes.

A council spokeswoman said more than 7,740 applicants were on the waiting list for council houses and housing association homes, with more than 4,700 people in “significant housing” need due to overcrowded accommodation, medical needs or homelessness.

“We recognise the problems caused by overcrowding in the city and offer a higher priority on the common waiting list for overcrowded families.

“We are currently reviewing the help available to overcrowded families and are developing a range of measures to increase the supply of larger properties,” she said.

What do political parties say?

“[The £2bn] investment is having a significant impact on the delivery of housing that meets the real needs of Welsh communities and we are on track to deliver our ambitious 20,000 affordable homes target this term despite the adverse impact the pandemic has had on the housebuilding sector.”

The Welsh Conservative manifesto has pledged a reformed “right to buy” from which 100% of receipts would be invested in social housing.

They said they would build 40,000 social homes over a decade and protect new-build social homes from sale for at least 10 years. They added that they were committed to building 12,000 houses a year.

Plaid Cymru shadow minister for housing Delyth Jewell said they had pledged to create 50,000 homes over a five-year Senedd term, including 30,000 social homes. She said it would be the biggest public housing programme since the 1970s.

More on this story