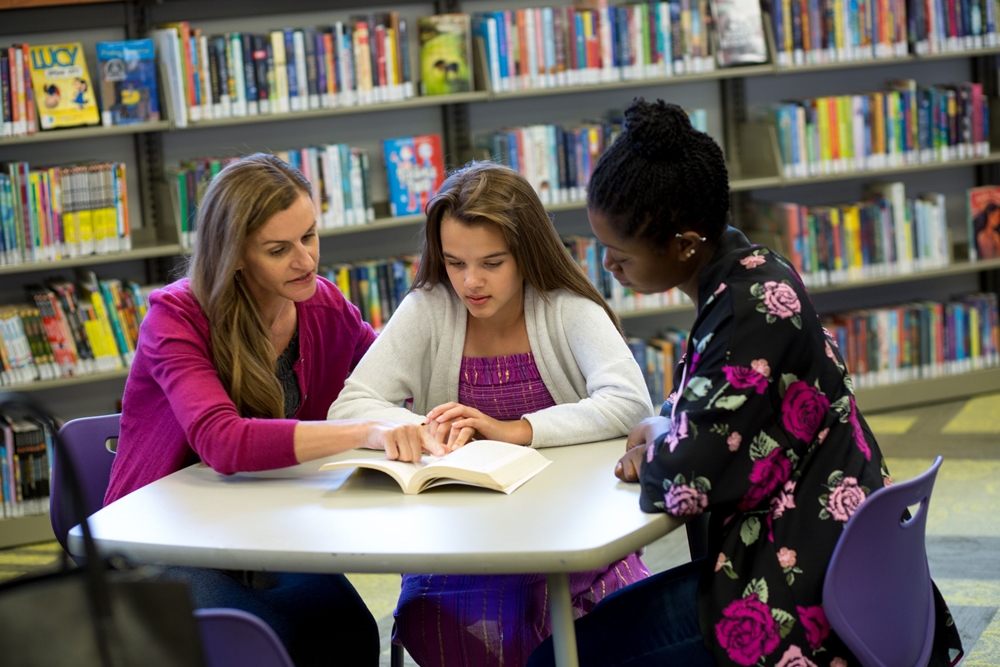 September is in full swing and, for many health advocates, that means it’s time to observe National Childhood Obesity Awareness Month.

Pictured (left to right) is Charlotte Markey; her daughter, Grace; and former student Nana Amponsah, a 2019 Rutgers–Camden graduate with a bachelor’s degree in health sciences, in the Camden County Library System’s Nilsa I. Cruz-Perez Downtown Branch on the Rutgers–Camden campus. Amponsah assisted Markey with research on her book.

The focus, she explains, shouldn’t be on obesity as a need to lose weight, but rather on encouraging proper health management – both mentally and physically.

“I don’t endorse the term ‘obesity’; the concern is that many people’s natural body sizes have been conceptualized as a medical problem in need of treating or fixing,” says the professor of psychology. “Rather, we can encourage children to participate in activities that support their mental and physical health. This has nothing to do with their body sizes.”

Taking proper physical and psychological care of oneself is a point that Markey shares with an especially vulnerable population in her enlightening new book, The Body Image Book for Girls: Love Yourself and Grow Up Fearless (Cambridge University Press).

“The focus of the book is to teach girls that they are so much more than how they look,” says the Swarthmore, Pa. resident. “Developing a positive body image is possible and important for girls’ general health and well-being, and to ensure that they have bright futures.”

Throughout the book, the Rutgers–Camden researcher answers what it takes to raise body-positive girls who aren’t plagued by self-doubt, so that they can grow up feeling confident about their bodies and themselves.

“It’s about helping them to gain self-acceptance, self-compassion, and self-protection, as well as an understanding of the science regarding nutrition and mental health in general,” says Markey, who was inspired to create an accessible resource for girls, including her own daughter and her friends. “This book is written for girls, but ideally they will read this book with a parent, and parents will consider it a resource as well.”

Timing, she adds, is everything.

“Up to 90 percent of women are dissatisfied with their bodies,” says Markey, who also authored the books Smart People Don’t Diet and Body Positive. “This body dissatisfaction affects everything, including mental health, especially in terms of disordered eating, social interactions, and even goals in life. Ideally, preventing body dissatisfaction is the answer.”

Summing up The Body Image Book for Girls, Markey cites a quote from Lexie and Lindsay Kite, co-founders of Beauty Redefined, which starts the book: “Your body is an instrument, not an ornament.”

As far as National Childhood Obesity Awareness Month goes, Markey notes that there are several practical points that parents can follow throughout September to encourage mental and physical health:

“Just as importantly, we should frame these behaviors in terms of taking care of ourselves,” says Markey, “not in terms of needing to fix or change ourselves.”