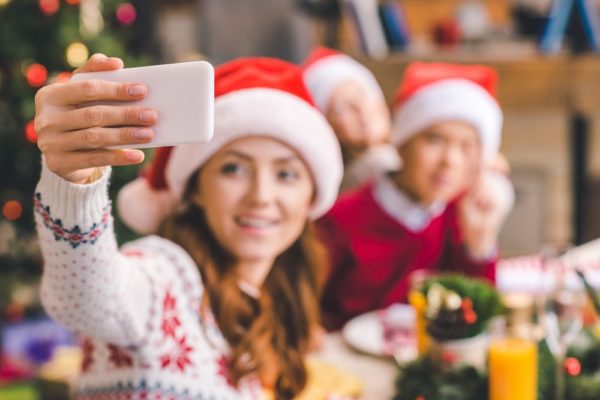 Just what makes the holidays so stressful?

Markey explains that many teens may experience heightened “appearance-related social media consciousness” during the holiday season.

For some, it might mean simply too much to do and too little time. For many teens, says Charlotte Markey, it might mean trying to get it all on camera – with a picture-perfect smile.

“For many young people, the holidays mean the added pressures of thinking about how they should look and behave in their social media posts,” explains the Rutgers University–Camden researcher.

According to the psychology expert, many teens experience what is called “appearance-related social media consciousness,” a phenomenon that could ramp up during the holiday season.

“They are living for what they will post later, as opposed to posting what they have already lived,” explains the Swarthmore, Pa. resident.

Markey, whose research examines issues related to developmental and health psychology, notes that study after study is increasingly showing the negative impact of social media on cultivating positive body images and eating behaviors.

“This is especially true for girls, who spend more time on social media than their male counterparts,” says Markey, who is currently conducting a study in her lab that analyzes these negative effects among girls as they start puberty and gain access to social media.

Naturally then, explains Markey, teens’ self-consciousness to look and behave in a socially acceptable way is more pronounced around the holidays, when there is a greater emphasis on taking and sharing pictures. The holidays, she notes, also mean more downtime from school and other scheduled activities, making it more likely that teens are on their devices and that social media is their primary means of interacting.

The Rutgers–Camden researcher notes that holidays also make it more likely that teens are on their devices and that social media is their primary means of interacting.

“Whether they are opening gifts, doing fun things, or meeting up with friends and family, taking and posting pictures is what everyone does,” says Markey. “But with that comes a heightened awareness of how they are being viewed and the added pressures to present themselves favorably.”

But now the good news, adds the Rutgers–Camden researcher: There are several steps that can be taken to help teens deal with these stresses. She encourages parents and educators to remember the acronym FACE when discussing these issues with them.

First off, she says, teens should “Filter” what they do on social media, getting rid of influences from their online interactions that are harmful or distressing.

On the flip side, says Markey, young people should be encouraged to follow positive influences on social media. She notes that a lot of online interactions can be positive, such as those with supportive family members and friends.

“The important thing to notice is how it makes them feel; if it isn’t good, then get rid of it,” she says.

Secondly, says Markey, teens should “Avoid” using social media at least part of the time. Think of it as taking filtering one step further, she says. The Rutgers–Camden researcher advises parents to help kids set boundaries defining when it is okay to check social media – for instance, not at dinner or during the school week – and encourage them to have real-world interactions.

Markey says that, if teens can avoid checking social media for a day or even part of a day, then they can break the need to check it all the time.

“This can be a real positive,” says Markey. “If they can avoid checking social media for a day or even part of a day, then they can break the need to check it all the time. They will also get used to having more face-to-face interactions instead of everything being online.”

Thirdly, says the psychology expert, parents should teach kids to be “Careful of Comparisons.” She explains that kids lack any objectivity when it comes to judging themselves and often look to others’ appearances and accomplishments as a metric.

Lastly, says Markey, parents should “Evaluate” what their teens are seeing on social media and encourage them to do the same. She notes that teens aren’t cognizant that what they are often viewing online isn’t reality, but rather people’s calculated efforts to present their best selves. Furthermore, she says, it isn’t so obvious to young people when they are seeing advertisements and thus people paid to wear or use certain products, or act in a certain way.

In such instances, she says, teaching kids media literacy can go a long way in moderating the negative effects of social media.

“When kids are more educated about what they are seeing, they are more apt not to see it as real life,” she says. “They learn to take things with a grain of salt.”

When all is said and done, says Markey, social media doesn’t have to be a nagging source of stress for teens over the holidays. She says that parents can emphasize the importance of just being in the moment with family and friends. She also reminds parents that kids aren’t going to police themselves, so it’s up to them to help their kids disengage from their devices.

“You want to give them the perfect gift?” asks Markey. “It might be just to get them off social media this holiday season.”