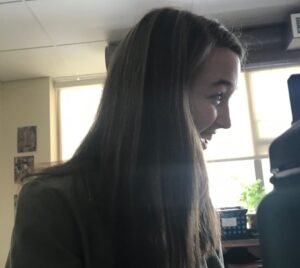 Ariana Leighton was a kind, bright and adventurous 15-year-old who had just completed her sophomore year at Wells High School with high honors.

Now, her family and school community are waiting for answers about how the teen died, apparently in her sleep, perhaps from an undiagnosed medical condition.

Leighton, who had dreams of being a writer or psychologist, died June 9.

Ariana Leighton. Courtesy of the family

That morning, her mother, Leya Leighton, made waffles for breakfast. Her father, Luke Leighton, was working from home. Their four children were home due to the COVID-19 pandemic. All the kids ate breakfast, except for Ariana.

Leya Leighton said she went to check on her and started screaming that something was wrong. Luke Leighton rushed to his daughter’s bedroom, shocked to find that his daughter had died.

The Maine Medical Examiner’s Office performed an autopsy, but it still does not know what caused her death. A statement released Wednesday said, “Ariana’s cause of death is currently pending further studies.”

The Leightons said additional tests are being done with a special focus on her heart.

“That’s probably the hardest thing … just waiting, but God has been really good to us,” Leya Leighton said, breaking down in tears.

While officials are still hoping to find a cause for Ariana’s death, unexplained deaths of teenagers do happen.

In 2019, Maine recorded three unexplained deaths of teenagers, which were officially determined to be from unidentified natural causes, according to the state’s Medical Examiner’s Office. In 2018, Maine saw four such deaths.

Lindsey Chasteen, acting administrator for the Maine Office of Chief Medical Examiner, said in an email that with these types of cases, an autopsy and further testing would be done to determine why a young, otherwise healthy child dies without warning.

“Although one unexplained death in a minor is more than anyone would like to see, my office hopes to provide insight into an individual’s health and genetics through the work we do,” Chasteen wrote. “Understanding the cause behind someone’s death assists loved ones in grieving, but can also provide valuable information for the healthcare of siblings.”

Nationwide in 2018, 73 children between the ages of 15 to 18 died suddenly and without a clear cause of death, according to the U.S. Centers for Disease Control and Prevention.  The number was larger – 231 such deaths – for children ages 1 to 4.

Sudden unexplained deaths in childhood, or SUDC, most often involves a seemingly healthy child who goes to sleep and never wakes up, according to the SUDC Foundation in Roseland, New Jersey. The organization promotes awareness and research, as well as support for families affected by such deaths.

“We have much more to learn about these tragic deaths but have been able to explain some previously unexplained deaths,” said Laura Gould Crandall, a research scientist at New York University and co-founder and president of the SUDC Foundation. “Some have been related to cardiac issues and others due to neurological issues. However, the complete spectrum of the underlying causes of death within the category of SUDC are unknown, which makes research difficult.”

The Leightons spoke openly about their daughter’s death, her blessed life, and the impact she had on people around her.

Ariana was the second oldest of their four children. She was very close to her sister, Calista Leighton, 13, and brothers, Gavyn Leighton, 17, and Josiah Leighton, 11.

Of their four children, the Leightons said Ariana was the most unique. She loved books, writing and journaling. She loved rollercoasters and scary rides. Her mother said she was super imaginative, fun-loving and adventurous.

“She was that type of girl… she wasn’t afraid to jump on the scary rides,” her mother said. “She was really tall, 6 feet tall. When she turned 3 years old, she was tall enough to go on the Tower of Terror (at Disney World). Only her out of all the adults and kids went on the ride with the guys.”

Ariana recently finished her sophomore year at Wells High. She was a leader on the school’s volleyball team and a member of the student council.

Rachel Graceffa, a science and physics teacher and volleyball coach at the high school, said Ariana was an amazing student and a leader on and off the court.

“Ariana was a true inspiration in life, and she left a lasting impression on so many that knew her,” Graceffa said. “Her teachers speak so highly of her and how she never backed down from a challenge, and her passion for writing. There were so many times when teachers said she was ‘that student.’ The one that had goals and was going to do everything she could to achieve those goals.”

Ariana took two advanced placement courses this school year. Steve Kayser, her teacher for AP European history, said she was a first-class student who worked hard and had a good sense of humor.

“She was definitely driven. She was always so positive and cheerful,” Kayser said. “She was very bright. I thought she had a bright future.”

Eileen Sheehy, principal of Wells High School, said Friday that students and faculty grieving Ariana’s death have reached out to counselors at the school.

“She was just a wonderful human being,” Sheehy said. “There’s a lot of sadness around Ari’s passing. It’s hard to grasp. It’s hard to get your head around it. It’s pure sadness.”

The Leighton family and community are waiting for answers as they grieve Ariana’s death. The state Medical Examiner’s Office is investigating, but it could take several weeks or even months for an answer. Sometimes there’s no clear cause.

Ariana was passionate and outspoken and used writing as an outlet to express herself. Her father said one of her goals was to write a novel by the time she finished high school. One of her last assignments was an autobiography for health class. In it, Ariana talks about her relationships with family and friends, her faith and her goals for the future.

“I value my family the most in the world because they have made me who I am today and because they are always there for me,” Ariana wrote. “I think I developed my values through my parents because they are both very independent, hard working people who know the value of setting goals that I have to work for to achieve.”

In the autobiography, Ariana said she admires her mother and is inspired by the way she lives her life. Leya Leighton said Ariana’s words are comforting in their time of grief.

“I felt relief after reading her words,” her mother said. “The biggest thing was to know she had a really strong faith like we hoped for her and to know that she is with Jesus, so we still have that hope that we will see her again.”

“She was in such a good place in her life when this happened. It’s been reassuring to know that,” she said.

Ariana had some close friends at school and friends from her childhood. Luke Leighton said his daughter wrote about her friends and how they helped shape the person she was becoming.

He said on the day before she died, Ariana planned a scavenger hunt for one of her friend’s birthdays. She put various gifts in Wells that her friend had to find. The last gift led to a party with a small group of friends at the beach.

“I think she really had a good time,” her father said.

Ariana had a strong faith. She attended Eastpoint Christian Church in South Portland. She also volunteered on a mission trip. Her father said they were planning to do another mission trip this year.

“She wanted to help people,” her father said. “She was super empathetic.”

Luke and Leya Leighton reflected on their faith. They expressed gratitude for the support they have received from the community.

“We all have a really strong faith in God,” Luke Leighton said. “We can’t know what God has planned. We trust that he is going to use this for something good and get us through it. If all it is, is the opportunity to tell people about him through her life and what she believed, then that’s

going to have to be enough for us.”

Leya Leighton said they trust Ariana is in a better place.

“It’s like God is hugging us. Hug your children every day,” she said.

Todd Miller, 53, avid skier who was beloved at Sunday River