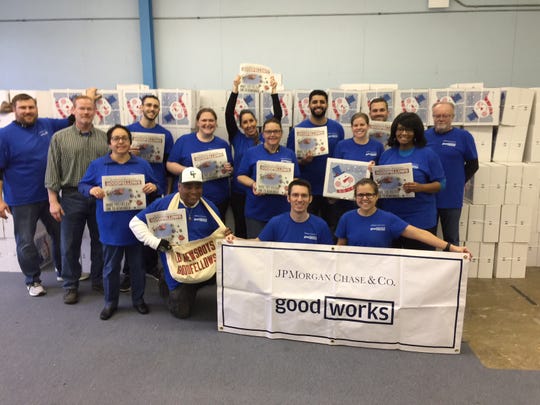 Detroit Tigers Manager Sparky Anderson once said that among his many  achievements, he was most proud of helping people in need with his philanthropic work here, which was possible because “Detroiters are the most generous folks in the world.”

That’s still true today and evident this season as businesses and organizations across the region are working to spread a little holiday cheer in some inspiring ways.

For Kevin Roach, CEO of Methodist Children’s Home Society, it was trying to come up with a way to help some young men from tough circumstances have a better holiday and a brighter future.

His idea: open a temporary Christmas tree lot and a coffee shop at the society’s main campus in Redford (26645 W. Six Mile Road). It’s being held to encourage entrepreneurially minded young men in the society’s independent living program who have aged out of the foster care system.

“We know this will help provide them with valuable job skills they need,” said Roach. “The holiday season can also be an emotionally and financially tough time for many, especially for youth without a traditional family.”

Methodist Children’s Home Society has helped children for 100 years. Proceeds will be split between the young men and foster children at MCHS. The Christmas tree/coffee shop enterprise is open through Dec. 6.

It was the vision of James J. Brady — a onetime newspaper delivery boy who was a plant manager for the carmaker Ransom E. Olds and worked for the IRS, among other jobs — to the start of the Old Newboys Goodfellow Fund of Detroit to help kids during the holidays.

Much has changed since it began in 1914, with almost half of members now being women, but the motto, “No Kiddie Without a Christmas,” remains the same. The Goodfellows are raising $1.1 million to provide 30,000 holiday gift packages stocked with clothing, books, candy and toys for children across metro Detroit. They also provide free dental services and summer camp.

The fundraising effort will get a bump Monday when the annual Goodfellow newspaper edition is sold, with volunteers, Detroit police officers and others helping out.

“Goodfellows has worked to positively impact the lives of young children in the Detroit area for over 100 years, and JP Morgan Chase has been a proud partner for over 75 years,” said Gary Wilson, local lead for JP Morgan Chase’s Volunteer Leadership Group in Michigan. The  company is one of many helping, including boxing and delivering 30,000 boxes.

JP Morgan Chase employees helping the Old Newsboys Goodfellow Fund of Detroit, which is raising funds for 30,000 holiday gift boxes that will be distributed to children in need across metro Detroit this season. (Photo: JP Morgan Chase)

“It definitely requires a team effort, but we love the camaraderie that comes along with it,” Wilson said.

Pete Waldmeir was a  Goodfellow recipient as a child. He never forgot the impact of having a gift under the tree during tough times, which is why he’s still involved. Waldmeir, a longtime journalist, is sending out 700 letters to friends and business associates asking for donations.

Looking ahead, the organization has started an effort to attract younger members (ages 18-29) to join NextGen Detroit Goodfellows. For information: detroitgoodfellows.org.

Giving Tuesday is a global day fueled by social media.

Every donation to The Henry Ford on Giving Tuesday will  be matched by longtime supporters Don and Mary Kosch, doubling the impact of each contribution.

“The Detroit Central Farmers Market symbolizes the city’s emergence from outpost to a major commercial center,” said Patricia Mooradian, president and CEO, The Henry Ford. “When we saved the building from demolition in 2003, we knew it was imperative for us to leverage the power of its story and give it a modern-day purpose … to inspire people to explore and learn about food, farming, healthy eating and agricultural innovation.”

Once restored, the market will be reconstructed at Washington Boulevard and Junction Street in Greenfield Village. It will serve as a place where visitors can learn about food, farming, healthy eating and agricultural innovation from the past, present and future