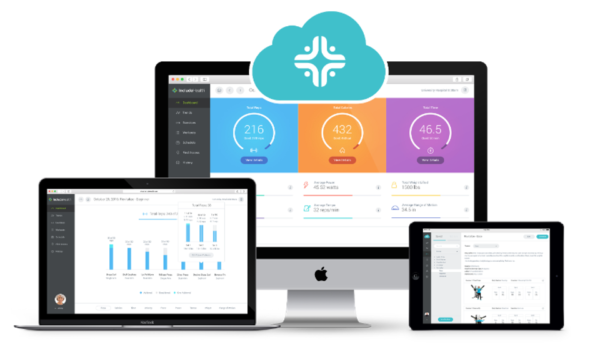 Startups pivot. It happens all the time. Plenty of companies have canned their original ideas in order to go in a different direction entirely.

But for Ohio-based IncludeHealth, its shift has only deepened its commitment to its original mission – accessible fitness for all – even though it’s found a totally new home in software and data analytics instead.

For founder and CEO Ryan Eder, it’s also a show of persistence – IncludeHealth has been a nearly 14-year journey that started during his senior year of college at the University of Cincinnati. Now, the company is working with a leading children’s hospital in a partnership that could take musculoskeletal care to the next level.

And that’s only the most recent bit of news.

“For me, my primary driver through all this has been to help people,” Eder said. “If you’re not solving a problem and helping others, what’s the point?”

Back in 2006, while at the gym one day, Eder noticed a man in a wheelchair who was relentlessly struggling to exercise. He wanted to do something, so he dedicated his thesis to this idea of an accessible piece of fitness equipment – but something people of all ages and abilities could use, too. He named it The Access Strength.

The Access Strength is an inclusive exercise machine that accommodates users, with or without disabilities, through engineering and universal design. It’s a comprehensive functional trainer – enabling accessible, full-body workouts on one footprint through a patented pulley configuration with rotating arms and adjustable carts. Dexterity-free handles replace traditional spring-loaded pins to setup and use with ease. Resistance selection is as simple as rotating a dial, and user stability is addressed through a versatile pad and integrated seat. Aesthetically, The Access Strength makes a considered effort to hide pulleys, bolts and mechanics to provide a non-intimidating and approachable experience. The machine is accented with bright lime green handles, the last hue visually discernible for someone with dementia, to quickly identify areas of adjustment.

His thesis, Eder said, was a success. Eder graduated from UC and started a career in product design. The Access Strength was still only a concept on paper but, almost on a whim, he submitted it for the Industrial Designers Society of America’s International Design Excellence Awards (IDEA), a worldwide competition for design professionals and students.

It won Gold, Best in Show and People’s Choice.

Apple won the same award the following year, in 2008, for its original iPhone.

“I was stunned,” Eder said. “To date, I think we’ve won 29 innovation and health awards, just on this system, and a lot of it was based solely on its potential.”

The recognition served as a spring board. Eder was still working full time in product design, so he moonlit IncludeHealth on nights and weekends. In 2013, the company built its first prototype and took it on the road, driving across the eastern U.S. to demo it at facilities like the VA Medical Center in Washington, D.C., and the Lakeshore Foundation in Birmingham, Alabama, a training site for Olympic and Paralympic athletes. About halfway through the tour, Eder started thinking there was an opportunity for more.

“I started saying, ‘OK, it looks like we solved the physical side of accessibility. What about the cognitive?’” he said. “Now that everyone can use this, how do you know what to do, how much to do and how to keep track of things?”

In 2016, the company debuted a cloud-based platform, IncludeCloud, so users could develop online protocols, provide autonomous instruction, collect data and provide analytics – all accessible on any tablet or computer. In 2018, it put that tech into the hands of customers. First, at the VA Medical Center in Cleveland in its spinal cord injury clinic, but also Ohio State Medical Center; Christian Village, a senior living facility outside Cincinnati; at facilities in Chicago and Detroit; at Dayton Children’s Hospital and neighboring Wright-Patterson, where IncludeHealth is applying its tech toward next-generation performance protocols for warfighters at the Air Force’s largest exercise science lab.

In the latest partnership, IncludeHealth will license a digital health technology originally developed at Cincinnati Children’s Hospital Medical Center, the nation’s third-ranked pediatric facility, that could prove a game changer in musculoskeletal care.

The tech, aNMT (pronounced animate, short for Augmented Neuromuscular Training), is a digital coach that can, when combined with IncludeHealth’s cloud platform and data analytics, objectively measure and correct movement.

If a physical therapy patient, for example, does not perform an exercise correctly, injuries don’t heal and pain can persist, said Greg Myer, Ph.D., director of The Human Performance Laboratory at Cincinnati Children’s, and director of the Sport Performance Optimized by Research & Technology (SPORT) Center. But aNMT can assess and provide feedback in real-time. Movement is captured through state-of-the-art cameras, and using proprietary aNMT algorithms, is processed in milliseconds, which gives real-time biofeedback about whether a movement was correct. The virtual coach objectively and autonomously assesses, corrects and optimizes the user’s biomechanics.

IncludeHealth will integrate and pilot the technology this year, Eder said. The plan is to commercialize it shortly after.

Eder called it a “major milestone” for IncludeHealth. A media release called it a “game changer” that “redefines” the $29.6 billion a year physical therapy and rehabilitation industry. Sixty-one percent of all sports injuries are musculoskeletal. Employers spend more on musculoskeletal disorders each year than any other condition or chronic disease.

“Everyone is trying to get from point A to point B, from 80 year olds with dementia to teenagers with ACL injuries and everyone in between,” Eder said. “Everyone has a different Point A, and everyone has a different Point B, but if you’re able to standardize and streamline the process through technology and data – being able to evaluate where someone’s A is and determining how efficiently you can get to point B, with better outcomes and lower cost – that’s the holy grail.

“The industry right now is very fragmented…there’s isolated pieces [of technology] on the market, and that creates administrative nightmares,” Eder added. But IncludeHealth’s approach is unique, he said. “It is about the software and the data. And delivering it through a medical-grade, HIPAA-compliant cloud infrastructure that can be deployed in high-stakes facilities like hospital networks and training facilities alike.”

Meanwhile, shifting from an equipment company to a software and data firm has changed everything. The next 12 months are poised to be IncludeHealth’s most expansive yet.

That’s not a surprise to Mike Venerable, CEO of CincyTech, a regional seed fund, and IncludeHealth’s largest investor. CincyTech has backed the company from almost the beginning – and continues to be one of its biggest cheerleaders today.

“The best founders start companies because they are compelled to solve a problem,” Venerable said. “Ryan’s original vision for a machine is an example. That might have been the endpoint for many entrepreneurs, but it was just the beginning for Ryan. He has built IncludeHealth around bold vision and a relentless commitment to improving access, outcomes and value in cutting-edge care.”

As for the company’s major shift, if not a pivot, what exactly would Eder call it?

“I like to say we ‘fanned.’ We’re doing a lot more than we originally aimed to do while still solving the original problem that sparked it all,” he said.

“It is amazing, thinking back that it’s been 13.5 years since I started this,” Eder added. “If IncludeHealth didn’t go forward, it wasn’t going to be because I didn’t give it everything I had. I will continue to push it and keep growing. And what’s exciting, the more we push and the more we build, the more impact it can have. That just fuels your fire.”