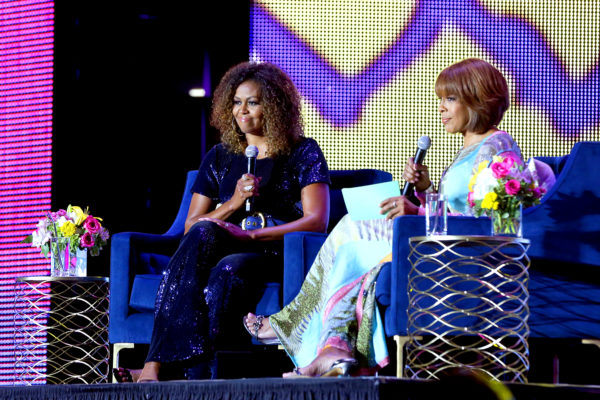 If Michelle Obama is living her best life — best-selling memoir, glamorous travel with family, freedom from politics — count her as determined to help other women live theirs.

“We [as women] have to own our health. It’s one of these things that no one can take from you,” the former First Lady said at the Essence Festival in New Orleans over the weekend.

Obama, who led a massive White House campaign for child health and fitness during the eight years of her husband Barack‘s administration, has been honing her wellness message to the tens of thousands of women worldwide who have flocked to her stadium appearances in promotion of her book Becoming.

That message crystallized in her headliner’s appearance at the festival on Saturday. Interviewed on stage by her friend (and CBS News anchor) Gayle King, Obama said that women need to “un-train” each other when it comes to putting their wellness last.

“When it comes to our health as women, we are so busy giving and doing for others that we almost feel guilty to take that time out for ourselves,” Obama said, getting personal about her own experience when her two daughters were babies and she and Barack were in marriage counseling.

“A lot of mothers will understand this, because I found myself looking around after I had my kids, and I didn’t have time for me, but my husband was at the gym every day. And I was like, well, how are you going to the gym? He was like, ‘I make time for the gym.’ I was like, what?”

“This was right when we started going to counseling, y’all, so this was one of our issues, you know? But I found myself getting mad at him because he was doing what he needed to do for him. And I think for us as women, many of us, we have a hard time putting ourselves on our own priority list, let alone at the top of it,” Obama said.

“If we don’t have our act together as women, as mothers, as grandmothers, we aren’t going to be able to get our kids on track.”

Obama pressed women to start a conversation — “with ourselves, with our own daughters” — about what keeps them from putting themselves first.

“We’re living in a world where we, as women, are so devalued, we have trained ourselves to think we don’t deserve it, that we don’t even deserve to take care of ourselves,” she said.

Obama, 55, told PEOPLE on the occasion of her 50th birthday in 2014 that, at that milestone, she had given careful thought to health and aging  — and was taking action.

I make sure that I am up on my checkups. I have never missed a mammogram or a pap smear. I’ve had a colonoscopy. I don’t obsess about what I eat, but I do make sure that I’m eating vegetables and fruit,” the then-First Lady said.

As for exercise, Obama described shifting from weights and heavy cardio to “things like yoga that will keep me flexible.”