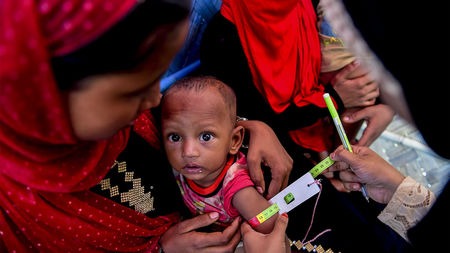 Even after starving children get enough to eat again, they often fail to grow. Their brains don’t develop properly, and they remain susceptible to diseases, even many years later. Two studies in Science this week now suggest fostering the right gut microbes may help these children recover. The work also pinpoints combinations of foods that nurture the beneficial microbes.

Most of the experiments were in animals, but a small group of malnourished children given those foods also showed signs of improvement. “This is an outstanding and extremely comprehensive study,” says Honorine Ward, a microbiologist and global health expert at Tufts University School of Medicine in Boston. Tailoring food aid to foster the microbiome “could be a key to new strategies for improving global public health and human potential,” adds David Relman, a microbiologist at Stanford University in Palo Alto, California.

Tahmeed Ahmed, director of nutrition research at the International Centre for Diarrhoeal Disease Research, Bangladesh, in Dhaka, has tried for 30 years to help malnourished children recover better. About a decade ago, he was intrigued by work by Jeffrey Gordon at Washington University in St. Louis, Missouri, linking certain gut microbes to obesity. The two scientists wondered whether the microbiome—the set of microbes living in and on the human body—might also play a role in obesity’s opposite number, malnutrition.

Together, their teams reported in 2014 that the gut microbiome normally “matures” as an infant grows into a toddler. They also noticed that it remains immature in severely malnourished children, dominated by bacteria found in younger healthy children. Two years later, the researchers put mature and immature microbiomes from children into mice raised without microbes. Animals given the immature microbiomes put on less muscle, had weaker bones, and had impaired metabolisms, suggesting a mature microbiome might be needed for proper development.

To pinpoint which among the microbiome’s hundreds of strains are linked to maturation, Arjun Raman, a postdoc in the Gordon lab, analyzed data from fecal samples that Ahmed’s team had collected monthly from 50 healthy infants in Bangladesh as they grew. Raman identified 15 types of bacteria that increased and decreased in concert as the microbiome matured. He and the team saw the same pattern in healthy children from Peru and India and even in germ-free piglets given the bacteria and eating the same food as the Bangladeshi infants and children, they report in Science.

Fostering or suppressing those microbes could be key to helping children recover from malnutrition, the researchers thought. To test that idea, they needed a way to monitor recovery. Looking for a molecular signature of healthy growth, a graduate student in Gordon’s lab, Jeanette Gehrig, and colleagues monitored more than 1000 proteins and metabolites, such as fatty and amino acids, for ones that change as healthy children grow and malnourished ones recover.

Gehrig and the rest of the team then tested the effects of various foods on mice and piglets whose microbiomes had been transplanted from malnourished infants. They hoped to find foods that could “encourage catchup growth in the microbiota,” Gordon says. Milk powder and rice, standard components of food aid, did little to foster maturation, but chickpea, banana, and soy and peanut flours helped the microbiomes mature.

The researchers then fed mice and piglets supplements that combined all four foods and saw that the animals’ microbiomes matured, and their growth improved. “This study points to the importance and utility of thoughtfully selected nutrients to support key members of a microbiota,” Relman says.

As a final proof of principle, Ahmed, Gordon, and their colleagues compared their supplements to standard recovery fare in about 60 malnourished Bangladeshi children for 1 month. That was too little time to assess long-term physical recovery, but long enough to see effects on the molecular signatures in the blood. Only the four-food combination sharply improved those signatures, they report in Science. It also improved the 15 bacteria Raman’s team linked to maturation.

The results suggest a way to improve nutrition even in well-fed children, in whom a poor diet can lead to an increased risk of obesity, diabetes, and other diseases as adults. “If caregivers know the best foods to feed their children to support the development of their gut microbiota, we could potentially prevent undernutrition and immature microbiota to begin with,” Gehrig says.

Relman and others are more cautious, particularly because it’s not clear the mature microbiomes will persist in malnourished infants who ate the supplements. Chris Damman, a senior program officer at the Bill & Melinda Gates Foundation in Seattle, Washington, which funded the work, says, “I wouldn’t say this is ‘the future’ or ‘the cure-all.’ But it’s certainly an exciting lead and one that we think has promise.”

Back in Bangladesh, Ahmed is coordinating an effort to provide the microbe-boosting diet and others to a larger group of malnourished children. The team will follow the children for 3 months, long enough to see whether the beneficial effects translate into healthy development. He’s hopeful, he says, that “this can be a game-changer in the treatment of malnutrition.”