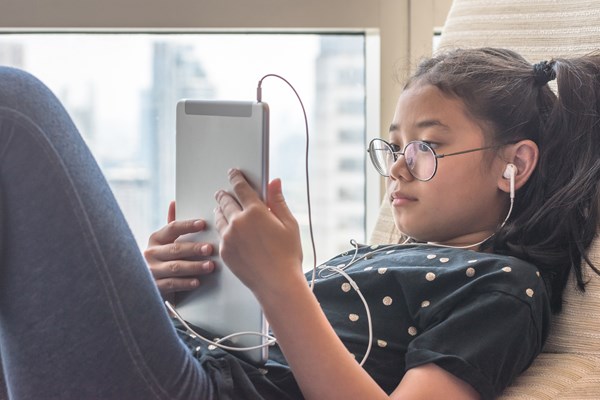 Between tablets, phones, TVs and laptops, many parents find it a daily battle to limit their children’s screen time.

This is especially true during the summer holidays, when kids have more time on their hands to endlessly scroll through YouTube videos and social media sites.

But aside from cranking up the price of your electricity bill, experts have warned that too much screen time could have a negative effect on young people’s mental health.

A study published in the journal JAMA Pediatrics assessed the correlation between screen time and symptoms of depression among young people, and found that those who spent lots of time online were most likely to exhibit the key symptoms.

The research team conducted the study over the course of four years, using 3,826 young people with an average age of 12 and a half years old.

If you’re a parent that’s keen on limiting the time your kids spend online, a good way to get them to hand over their devices  – without having a meltdown – is to set some reasonable ground rules.

As a start, why not try swapping night-time scrolling – which can have a negative effect on sleep – for a soothing audiobook instead? Here’s our pick of the best take in everything from gripping fantasy novels to laugh-into-your-pillow romantic comedies.

This collection of entertaining short stories takes in some of the biggest name’s in children’s writing, including David Walliams, Oliver Jeffers, Judith Kerr and Emma Chichester-Clark. While it’s primarily designed to keep kids from asking, “Are we there yet?” in cars, planes and trains, we reckon it’s just as effective at soothing kids off to sleep.

Some days you might think you’ve got them… and it’s never a bad thing for your brood to read about ‘The World’s Worst Children’! ⁣👫 ⁣ This cautionary series of tales – about the likes of Sofia Sofa, Blubbering Bertha and Dribbling Drew – are just some of the extensive selection of books by the wonderful David Walliams we stock at #BookwormDubai. ⁣ ⁣ If you’ve read anything by Walliams, would you agree with the celebrity author’s frequent comparison to the legendary Roald Dahl? Tell us below!

This hilarious collection of stories by comedian David Walliams is sure to get kids excited to switch off their computers and start their bedtime routine. It includes ten wickedly funny tales about some of the most awful children imaginable – and there’s even an incredibly apt tale about a girl who’s so glued to her TV screen she’s started to turn into a sofa.

7 Covers in 7 Days📚✨ Day 4 >RULES: Each day, I will post the cover of a book that I love and nominate someone new to start the challenge. No explanation, no discussion, just post the cover and by doing so, spread some literary love! 📚✨😄✨📚 . . Today I nominate: @msliterary 😍💕 . . . . . . . #bookstagram #booklove #booklife #bookaholic #northernlights #thegoldencompass #hisdarkmaterials #phillippullman #bookpic #succulents #booksofinstagram #bibliophile #bookphotography #booktag

Beloved by children and adults everywhere, the first book in Pullman’s His Dark Materials trilogy tells the compelling story of 12-year-old Lyra, who travels to the frozen arctic with her animal daemon to save her friend and find her father. With plenty of twists, turns, and a good dash of fantasy, this fast-paced page-turner is the ideal listen for kids with big imaginations.

The Hunger Games by Suzanne Collins

<may the odds be ever in your favour> • Hey everyone! I have an hour left in my audiobook of Girl in the Blue Coat and wow. I just reached a huge twist and I was shook. I’m going to listen to more tomorrow while I’m packing and I’m so excited to find out what happens but I also don’t want it to end. QOTD: how do you feel about the hunger games prequel? AOTD: BEYOND EXCITED

If your child is a fan of thrillers and won’t be upset by something a little scarier, this dystopian, science fiction thriller tells the story of 16-year-old Katniss Everdeen, who takes part in a terrifying reality TV show called The Hunger Games. The game has just one rule: to kill or be killed. Her fight for survival is an action-packed adventure that kids can enjoy, chapter per chapter, over several evenings.

To All The Boys I’ve Loved Before by Jenny Han

To All the Boys I’ve Loved Before is that kind of book: the kind that is as sweet and addictive as candy🍭 Mostly, it’s because of the unabashed sweetness and the way it builds itself around nice people who care about each other and want to do nice things for each other, like for instance writing each other love letters or letting the other person use them as a pillow during a nap. It is heart-melting❤️ I enjoyed reading and watching it,the movie made me read the books,which means a lot to me,movies aren’t the same. I thought about adding an inspirational quote that might help us. Quote of the day: “You know you’ve read a good book and when you turn the last page and feel a little as if you have lost a friend.” I have to apologize for my mysterious disappear. It’s been two days since I last posted and I’m very sorry. I had some work to do,some books to start,some photos to do and some adventures to begin!I will be more active if you will support me and grow a big and beautiful family which is addicted to books🤗 I hope you’re having a great day wherever you are and don’t forget to enjoy every breath you take! Love you all! *ignore this #* #toalltheboysivelovedbefore #toalltheboysivelovedbeforeedit #toalltheboysilovedbefore #toalltheboysilovedbeforeedit #jennyhan #jennyhanbooks #larajean #larajeancovey #larajeanandpeter #larajeansong #peterkavinsky #peterkavinskyandlarajean #tuturorbaietilorpecareiamiubit #bookstagram #books #books #bookshelf #bookclub #bookworm #bookobsessed #bookobsession #meandbooks #meandbook #lovingbooks #bookloving #reading #readingtime📖

High school student Lara Jean Song’s life is turned upside down when the secret love letters she’s written to her crushes are mailed out to them. Suddenly, she’s the centre of the school’s attention. Teenagers will cringe, laugh and cry along with this romantic tale.