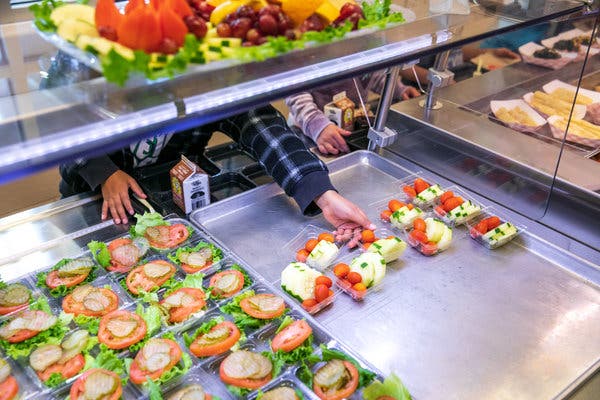 WASHINGTON — The Trump administration moved on Friday to roll back school nutrition standards championed by Michelle Obama, an effort long sought by food manufacturers and some school districts that have chafed at the cost of Mrs. Obama’s prescriptions for fresh fruit and vegetables.

The proposed rule by the Agriculture Department, coming on the former first lady’s birthday, would give schools more latitude to decide how much fruit to offer during breakfast and what types of vegetables to include in meals. It would also broaden what counts as a snack.

A spokeswoman for the department said that it had not intended to roll out the proposed rule on Mrs. Obama’s birthday, although some Democratic aides on Capitol Hill had their doubts. Food companies applauded the proposal, while nutritionists condemned it, predicting that starchy foods like potatoes would replace green vegetables and that fattening foods like hamburgers would be served daily as “snacks.”

“Schools and school districts continue to tell us that there is still too much food waste and that more common-sense flexibility is needed to provide students nutritious and appetizing meals,” Sonny Perdue, the agriculture secretary, said in a statement. “We listened and now we’re getting to work.”

Combating childhood obesity was Mrs. Obama’s signature issue, a rallying cry for her supporters and a lightning rod for conservative critics who saw it as epitomizing the liberal “nanny state” of the Obama era.

Mrs. Obama pressed to update federal nutrition standards and to bring healthier foods to schools. She planted the White House kitchen garden on the South Lawn — the first real garden since Eleanor Roosevelt’s World War II “Victory Garden” — and invited students to sow and harvest it each year. And she created the first Task Force on Childhood Obesity and developed the program “Let’s Move!” that aimed to get children to engage in 60 minutes of physical activity each day.

“Food waste was a problem before the healthier standards were enacted, so rolling them back won’t solve that problem,” Ms. Cohen said. “It’s just that more people are paying attention to the issue now.”

With nearly 14 million American children, or about 19 percent, considered obese, few doubted Mrs. Obama’s intentions. And with more than 30 million children participating in the National School Lunch Program, school meals were a powerful way to target poor diets. Of that total, 22 million children are from low-income families.

But the cost and prescriptions of her policies had detractors from the beginning: beef-and-potato state lawmakers, libertarians and camera-ready conservatives like Sarah Palin, who showed up to events carrying cookies and accused Mrs. Obama of robbing children of dessert.

“The school breakfast and lunch programs have been riddled with waste for a long time, plate waste being one, and that turns into financial waste,” said Jonathan Butcher, a senior policy analyst at the conservative Heritage Foundation.

“Clearly, no one wants kids to be served unhealthy foods,” he added, but if nutrition requirements lead to children throwing away the food offered, the standards are pointless.

The Agriculture Department said the changes reflected requests made over the past two years by those at schools who serve meals to children and teenagers. The department plans to release a regulatory analysis and to open the public comment period on Jan. 21.

The proposal is the department’s second attempt to roll back nutrition standards promoted by Mrs. Obama through the 2010 Healthy, Hunger-Free Kids Act, which required schools to serve children fruits and vegetables every day and to offer more whole grain-rich foods and fat-free or low-fat milk. It also required school meal providers to limit calories and reduce saturated fat, trans fat and sodium.

The department finalized a rule in December 2018 that gave school meal providers permission to serve flavored low-fat milk in the National School Lunch Program and school breakfast program. That rule stipulated that only half of the weekly grains must be whole grain-rich, not the 100 percent target of the Healthy, Hunger-Free Kids Act, and it gave providers more time to reduce sodium in meals.

Attorneys general from six states and the District of Columbia and the Center for Science in the Public Interest have sued the department over the December 2018 rule, arguing that the rule puts millions of children at greater risk of health issues.

Friday’s proposal goes further. It allows schools to adjust fruit servings during breakfast, to reduce waste, it said, and to make room for “meats and meat alternates.” Under current regulation, providers must offer one cup of fruit during breakfast for students in kindergarten through 12th grade.

The new rule would also relax current vegetable requirements, which say providers must offer a variety of vegetables, like leafy greens and starchy foods. A department official said the goal was to give more flexibility, not change the amount of vegetables offered.

Child nutritionists said the proposed rule could lead to school meal providers turning away from healthy foods, instead of coming up with ways to make that food more appealing. More flexibility on the types of vegetables offered could lead to meals dominated by starchy foods, like potatoes, which are cheaper than green vegetables.

The National Alliance for Nutrition and Activity said allowing à la carte purchases could create a “giant junk food loophole.” It could also lead to children frequently turning to meals that are meant to be eaten once a week, like hamburgers.

Democrats reacted furiously. Representative Ayanna S. Pressley, Democrat of Massachusetts, said on Twitter that “The Occupant is trying to play petty with the food our babies eat. Add it to the list affirming that the cruelty is the point with this White House.”

Representative Robert C. Scott of Virginia, the chairman of the House Education and Labor Committee, said, “For many children, the food they eat at school is their only access to healthy, nutritious meals.”

The Trump administration, he added, was putting “special interests above the long-term health and development of America’s students.”

Those interests applauded, including the School Nutrition Association, which represents cafeteria workers and the food companies that provide schools with food.

“Updated nutrition standards for school meals have been a tremendous success over all, but a few of the requirements contributed to reduced lunch participation, higher costs and food waste,” Gay Anderson, the president of the association, said in a statement.

This rule is one of two that the Agriculture Department plans to propose next week. The other rule would give meal providers more flexibility under the summer meal programs.