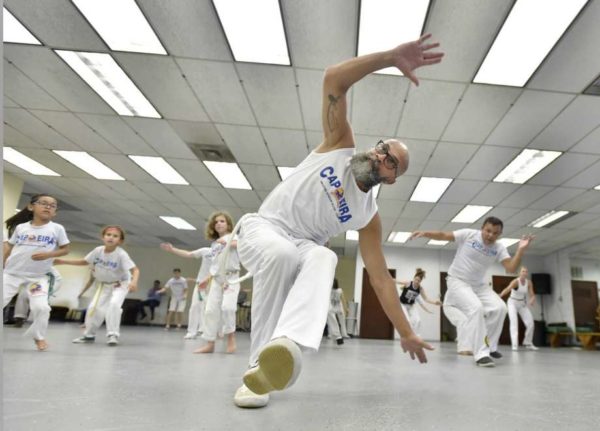 NEW HAVEN — Efraim Silva transformed his life through the Afro-Brazilian martial art of capoeira, and now he’s hoping to transform the lives of others at his newly opened Brazilian Fitness Center at 222 Ella Grasso Blvd.

“Everything I ever got that was good came from capoeira,” said Silva, a world expert who came to this country from Brazil 30 years ago. “ Through this community people find love, happiness, friendship.”

Silva, 54, a West Haven resident, became an American citizen through the category of “being an alien of extraordinary ability” for his capoeira skills.

He brings Brazilian culture to area schools through performance and talks, and travels the world by invitation to teach workshops, including to Japan, England, France, Italy, Hungary, Poland, Romania and the Czech Republic.

He also fulfilled his dream several years ago of opening a capoeira school, Connecticut Capoeira and Dance Center, which as it grew has had a few homes in New Haven. Recently, when Silva learned his Peck Street lease was not renewable, he thought of closing the school, but then fell in love with the new location on the boulevard — much to the delight of his dedicated students, both adults and children.

Deciding he wants to get serious about making capoeira his primary business, rather than supporting it with his other ventures, Silva has rebranded to make it a fitness center with a Brazilian flair.

While capoeira has a strong following globally, many here didn’t know what it is, he said.

Capoeira, an Afro-Brazilian martial art that looks like a dance, is a high-energy cardiovascular workout that integrates other art forms, including gymnastics, martial arts and music.

Capoeira originated in Brazil, as a means for people enslaved there to escape. The enslaved practiced in their spare time, as if dancing — to fool the slaveowners — but when they tried to escape, they would initiate contact.

When the martial art is practiced as a non-contact sport, as it is in classes, it looks like a beautiful dance.

As part of his rebranding, Silva is working with a consultant and recently attended a fitness center business conference in Denver.

Brazilian Fitness Center will hold an open house from 10 a.m. to 2 p.m. Aug. 31, at which the community is free to sample classes. He will offer variety of classes for adults, children, the special needs community and the mommy-and-me set.

In addition to offering capoeira, Silva is designing a Brazilian fitness dance class to work the whole body and will offer samba, Brazilian jiu jitsu.

Lindsey Bauer of New Haven, a dance teacher at Cooperative Arts and Humanities High School and director of programs at Elm City Dance Collaborative, is a longtime student of Silva’s school.

“As a dancer, I like that it (capoeira) changes my perspective on how to move the body. You use your hands as your feet,” she said. “The three-dimensionality of capoeira changes the way I look at dance movements and even influences my choreography.”

For children, capoeira provides discipline, a cultural history and the importance of music, movement and dance, Bauer said.

Capoeira also involves learning to play instruments — as it is set to music — including the berimbau, an African piece; the pandeiro, much like a tambourine; and the atabaque, an Afro-Brazilian hand drum.

Parents of children who take capoeira classes at the school say it’s a great enricher for the kids, and also themselves through friendships formed. At Silva’s school there is a strong sense of family, and social get-togethers come along with that.

Mauriel Vega of Woodbridge has two children who have taken classes for more than two years. He and his wife chose capoeira because they wanted an activity to reflect his wife’s African roots.

“I like the community that it builds,” Vega said. “Efraim is just fantastic. He teaches them discipline, he’s respectful, he has a good rapport with them. I believe he really cares about them.”

Jason Wright of New Haven said his daughter is “very physically active” and capoeira is a great way for her to learn skills.

“Here there is an emphasis on the ability to move and understand rhythm,” Wright said. “It’s a very tight community.”

Silva, who has two sons, said capoeira builds confidence in kids and he loves to see shy kids bloom into leaders right before his eyes.

Silva also is a licensed massage therapist, mainly focused on sports medicine massage, which is a nice connection for him, since capoeira is a workout that often leaves people sore. “It’s an amazing feeling for me,” to make people feel better, he said.

It wasn’t an easy start in life for Silva.

The third-youngest of 13 children, Silva grew up in a rough, impoverished area of São Paulo, Brazil, where the family of 15 lived in a one-room house with a little kitchen to the side.

He took up capoeira at 13 to learn to defend himself from a brother who was 10 years older. That brother never touched him again, but Silva became smitten with the martial art.

Silva quit high school in his native Brazil at 17 to pursue his passion for teaching capoeira. A few years ago, he earned a diploma through West Haven High School’s adult education program.

“It was difficult to come from where I came from,” he has said. “When people complain about how difficult life is, they’re talking to the wrong guy.”

Silva has that compared to where he grew up, “I feel like a trillionaire.”

At age 25, he came to America to visit his mother, Otilia Silva, who was on a long-term visit with his sister. Silva had no intention of staying, but that changed.

He has taught capoeira at five colleges, including the last 16 years at Yale University.

“My life has been taken everywhere because of capoeira,” he has said.