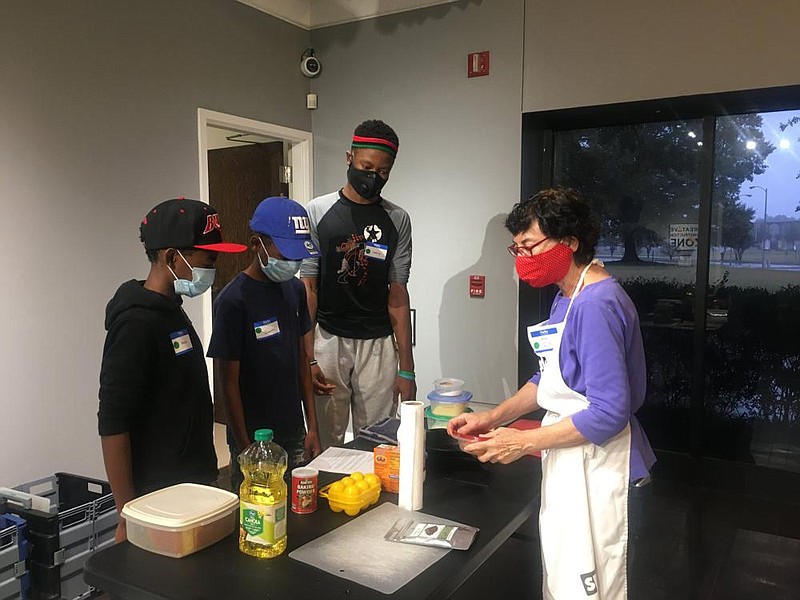 The smoked paprika was optional. But the end result — a cauliflower dip — was for sure delicious.

For 16-year-old Cedric Adams, the CrEATe Lab cooking workshop held at the Arts & Science Center for Southeast Arkansas was a way to continue honing his skills.

“I think it’s helping,” he said about learning to eat healthier.

Cedric attended this year’s earlier cooking workshops learning to wash, chop and dice his way around the kitchen. Like this workshop, the previous ones were taught by cooking expert Faith Anaya.

Anaya is the founder of the Central Arkansas-based program, “Today, Kids Cook!”

Since starting it up in 2004, Anaya has worked with more than 2,000 youngsters in after-school classes and summer camps.

The ASC workshop was limited to eight and it was full.

MORE THAN JUST A CLEAN PLATE

The program’s overall goal is to help Jefferson County families “turn knowledge of dietary choices into meals that they will enjoy and can afford,” said Shakeelah Rahmaan, the center’s public programs coordinator.

“We want kids to learn to cook healthy food. They take their knowledge home with them,” Rahmaan said.

Anaya agreed, adding, “I’m trying to get them to try unusual or different foods and try new ways of cooking.”

For Casey Reed, 13, and Cali Reed, 7, who are brother and sister, Anaya’s offering of skillet cornbread wasn’t like the muffins their mom made.

Casey had taken a class in the past.

For kids, it’s about having fun while learning, and many excel at cooking, Rahmaan said.

BAKED INTO THE WORKSHOPS

Students are taught “basic skills, such as how to properly wash, peel, chop and slice various food items.

How to avoid illness from improper food preparation will also be taught,” Rahmaan said.

They also learn how to read a nutrition label, and a registered dietitian teaches nutrition workshops during the series.

So much so, that Cedric and his younger brothers, Mekhi, 13, and Quentin, 11, signed up for all three of the October workshops.

Rahmaan said, Cedric and his brothers have become familiar faces and are getting more comfortable in the kitchen.

“We enjoy helping our mom in the kitchen especially when helping make quesadillas,” Quentin said.

TOPPING THE SCALES, NOT

IN A GOOD WAY

According to the state Health Department, Jefferson County’s obesity rates for adults is about 39.1%, while another 31.7% are overweight.

Further complicating the problem, about 44. 2% of the county’s population is categorized as having low health literacy.

Rahmaan said weight is a problem that the art center and its sponsoring partners are attempting to address through this program.

For more information about the CrEATe Lab workshops, people can contact Rahmaan at (870) 536-3375 or srahmaan@asc701.org.