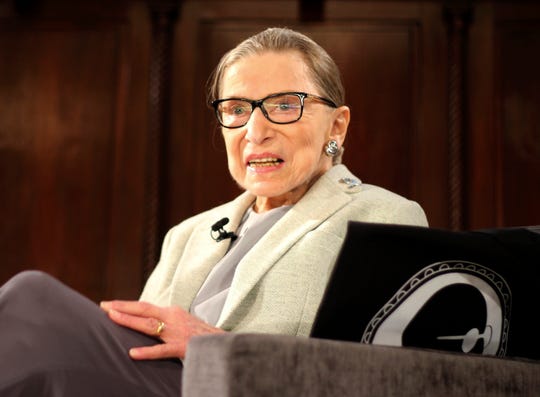 In today’s fast-paced news environment, it can be hard to keep up. For your weekend reading, we’ve started in-case-you-missed-it compilations of some of the week’s top USA TODAY Opinion pieces. As always, thanks for reading, and for your feedback.

“As horrific as the 9/11 attacks were, they would have been even worse if not for a heroic group of everyday airline passengers whose remains rest here amid a common field of wildflowers and hemlock groves. Eighteen years ago on Wednesday, radical Islamic terrorists, trained in Afghanistan as part of Osama bin Laden’s al-Qaida network, hijacked four commercial jetliners and aimed them at the emblems of America’s financial and military might.”

“Ever since Justice Anthony Kennedy announced his retirement last year, commentators have prophesied that President Donald Trump’s replacement of that moderate jurist would lead to a conservative majority running roughshod over core liberal concerns. That’s why opposition to the milquetoast establishmentarian Brett Kavanaugh was so fierce, even before the 11th-hour sexual-assault allegations. Justice Kavanaugh was supposed to have single-handedly overturned Roe v. Wade, but a funny thing happened on the road to apocalypse. Particularly in petition rejections and other procedural votes, Kavanaugh has demonstrated a pragmatic approach. And a term with few big controversies showed the liberals voting together much more than the conservatives.”

“If you think our president is a “fool” who has “lost his mind” and is in the midst of “one the greatest political meltdowns of all time,” I have some terrible news.  You’re more confused than Donald Trump has ever been. And if you actually believe that Vice President Mike Pence has any interest in saving anything except his place on the ticket, stop trusting yourself with anything sharper than a giant foam finger.”

“As students settle in for the new school year, parents must ask: Do I really know what’s happening in my kids’ school? Do I really know whether they are safe? I didn’t know. But I want to be the last father in America who can honestly make that excuse.”

“A youthful rocker entered the coffee shop, clad in a T-shirt that read, “You may say I’m a dreamer … but I’m not the only one,” with an unflattering mugshot of Donald Trump. No doubt the shirt will elicit no shortage of thumbs-up in this liberal pocket of upstate New York. But it raises the question: Why are not more Americans out in the streets? What happened to the protest culture of previous generations, whether for civil rights or against the Vietnam War in the 1960s, or against the forces of globalization in the years before 9/11?”

“One of Wayne Pray’s earliest run-ins with the criminal justice system occurred when he was 22. He was arrested for having pills in two envelopes. At 29, he was given probation on fraud charges. By the time he was 41 he was charged as a drug kingpin, according to court documents and a New Jersey report that detailed black organized crime in the state. In 1990, a federal judge sentenced Pray to life in prison without parole, plus three 25-year stints for, among other things, cocaine and marijuana possession and distribution.”

“It’s not that talking to your enemies is a bad thing, and under certain circumstances, it is necessary. Indeed, it was encouraging if stunning that Trump revealed a three-way meeting that would have included representatives of the Taliban and the Afghan government, which don’t recognize one another. That is vitally important for negotiating the best deal Trump is likely to get. But not at Camp David. Not at the presidential level. And not to ink a withdrawal accord that is, at best, flawed.”

You can read diverse opinions from our Board of Contributors and other writers on the Opinion front page, on Twitter @usatodayopinion and in our daily Opinion newsletter. To respond to a column, submit a comment to letters@usatoday.com.