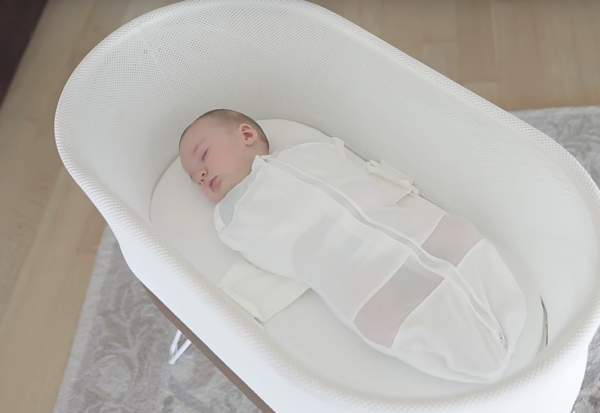 This story is part of CES 2020, our complete coverage of the showroom floor and the hottest new tech gadgets around.

My 3-month-old son wails like he’s being tortured as I strap his arms down in what looks like a kiddie version of a straitjacket. There’s a twinge of guilt that rises up within me, but I power past it as I tuck his legs into the swaddle and zip him up, securing him to the bassinet. But this is no ordinary bassinet. I press a button at its base, and white noise blares as a mechanism beneath sways him back and forth. Pacifier in mouth, he coos in opposition.

But within minutes, he’s fallen asleep.

That’s right, I’ve outsourced my bedtime duties to what amounts to a robot in the form of the Snoo bassinet. And yes, I constantly question whether I’m a good parent.

If you don’t have kids, the name Snoo will fly over your head. But bleary-eyed, exhausted parents with babies have surely heard about the $1,300 bassinet that promises to rock your kid to sleep for you.

The Snoo was just one of a myriad of baby tech products making an appearance at CES 2020 in Las Vegas, and it’s no longer alone. 4Moms, known for its own high-end, polished baby products and its mamaRoo swing, showed off its own smart sleeper, which launches in February for $330. They were joined by an array of other baby tech at the Sands Convention Center’s startup area, known as Tech West, underscoring just how entwined technology has become with every aspect of our — and our children’s — lives.

“You’re using a little bit of technology to help you,” said Dr. Harvey Karp, author of The Happiest Baby on the Block, a seminal read for new parents. He’s also CEO of Happiest Baby, which makes the Snoo. “That’s not a bad thing. It’s a smart thing.”

It makes sense that companies are keen to add a tech twist to baby products, a market that’s expected to reach $16.78 billion by 2025, according to Grand View Research. It’s a market that’s evolved since I first started eyeing this area, just before I had my first child four years ago. Back then, a lot of the products were focused on pairing existing products like thermometers or scales with apps on your phone.

Now playing: Watch this: Smart diapers, a state-of-the-art toothbrush, and a robot…

It’s a trend that turned me off to a lot of these products. I preferred to save my money for more basic necessities like diapers, baby wipes and formula. I thought baby tech was for suckers, capitalizing on new, impressionable and nervous parents looking to apps for comfort and support.

But my experience with the Snoo, and how it’s helped me claw back some of my lost sleep, has me changing my tune.

“Technology has definitely proven to be a game-changer in the baby space, opening up meaningful possibilities for parents that weren’t available before,” said Ashlee Neuman, deputy editor of baby care site The Bump.

While there’s been a lot of hand-wringing about robots taking traditional jobs, I’m okay with one handling my rocking duties.

My son was about 2 months old and sleeping an average of about 30 minutes at a time — all the time. My wife and I were in a permanent daze, so I didn’t quite process her Facebook message about the Snoo and the promise of getting a bit of our sleep back. I initially scoffed at it.

The Snoo’s $1,300 price tag, after all, scares away a lot of parents. But Happiest Baby began offering it as a rental for $100 a month, which is far more reasonable since it can only be used for the first six months of a baby’s life. Karp said interest in the Snoo skyrocketed after the change, and I can see why.

After a bit of a rough transition period, I’m now confident enough to plop my kid down knowing he’ll fall asleep after a few minutes. More importantly, he stays asleep for hours. (For more details on the Snoo, check out my colleague Vanessa Hand Orellana’s full review of the smart bassinet.)

There have been some setbacks. While I’ve been at CES, my son has entered a phase of sleep regression. Even the Snoo — which can sense when a baby cries and responds with more vigorous rocking and louder white noise — can’t console him at times.

And while I’m all in on letting the Snoo do all the work, my wife is more conservative in her use.

I still admit to pangs of guilt, and instinctively feel that I should be rocking the child myself.

“No one is prey for guilt more than a new parent,” Karp said in an interview. He assures me that if this were my fourth child, I wouldn’t even bat an eye.

He argues, however, that to be an effective parent, you need more sleep, and that the attitude of powering through and constantly caring for your child is actually damaging. As such, he sees the Snoo as more than just a smart bassinet.

The coolest (and weirdest) robots we’ve seen at CES 2020

“This is not a baby bed, this is a baby caregiver,” he said.

Karp said he’s at CES to tout some new medical data, including 65 million hours of infant sleep without a single reported death. He told me that companies like Snap and Under Armour are renting the bassinets as a perk for their employees, and that the Snoo is in tests at hospitals, with work underway to have insurance companies cover it.

While Karp downplays the cost, noting that the $100 a month amounts to less than a cup of coffee a day, it’s still a steep premium over other bassinets.

That’s where 4Moms comes in.

4Moms is traditionally known for its high-end products, but it’s attempting to move lower in price, CEO Gary Waters said in an interview Tuesday.

The mamaRoo sleep bassinet represents the perfect example, with its $330 price tag just a fraction of the Snoo.

The smart bassinet uses the same five rocking motions employed by the original mamaRoo swing, but offers a flat, horizontal surface for the baby to sleep in. There are side controls on the bassinet, or you can control it with your phone through an app. It also offers four types of white noise.

Unlike the Snoo, this bassinet won’t respond to the child’s needs. It can run a maximum of four hours before it shuts off. Waters said the company had found that parents preferred to have more control over the experience.

Still, at $330, the bassinet isn’t cheap. And it’s up to each parent to decide if these are worthy upgrades, or if the money is better spent on more diapers. (CNET hasn’t tried the bassinet or evaluated its effectiveness.)

“Most of the baby tech products available are nice-to-haves instead of absolute must-haves,” Neuman said.

At some point, my family’s lack of sleep made considering a smart bassinet a must-have. I’m ready for a full-on robot nanny next.

The information contained in this article is for educational and informational purposes only and is not intended as health or medical advice. Always consult a physician or other qualified health provider regarding any questions you may have about a medical condition or health objectives.