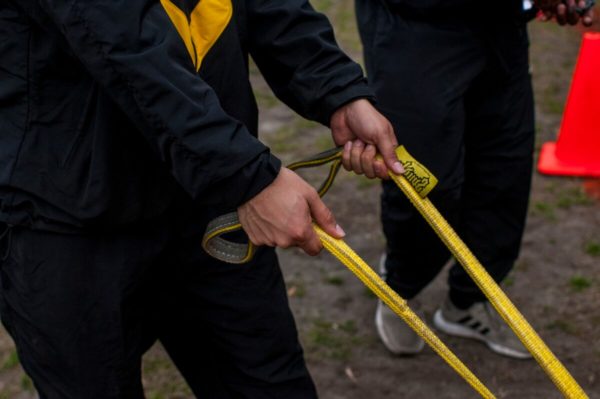 By: Rachael Riley, The Fayetteville Observer via the AP   4 hours ago

FAYETTEVILLE, N.C. — When Maj. Carpaccio “Pace” Owens was into about the seventh year of his Army career, he was diagnosed with chronic kidney disease.

His personal, civilian insurance company has denied him term life insurance based on the preexisting condition.

At 43, Owens is in “stage three” of the disease, meaning his kidneys function at about 50 percent.

Now 19 years into his Army career, Owens, 43, is one of the first soldiers within the 82nd Airborne Division known to reach an unofficial maximum score on the new Army Combat Fitness Test that goes into effect by October 2020.

“A lot of people look at me and think, ‘Oh, this dude’s just a meathead,’ and everything else, but I’m part of the population that a lot of providers are worried about,” Owens said.

Yet Owens believes passing the new fitness test is something that is attainable for soldiers if they put the work into it and commit.

A weightlifter since he was 12, Owens said when he received his diagnosis he faced doctors recommending that he medically retire.

Thanks for signing up!

“For my quality of life, and my mental preservation, I was like, I can either take what they say and take a medical retirement or I can fight for my livelihood,” Owens said. “So I ended up getting on a track. I ran a mile in 14 minutes the first time after I’d been diagnosed, and I was like, ‘hmm, I’m going to have some work to do.’”

Owens said he put in the work to pass the Army’s physical fitness test and meet standards to carry 35 pounds to make himself “retainable.”

“It’s one of those things that the PT test is a gateway for you to stay in the military, for you to be retainable, because you’re showing to your chain of command and your organization that you’re fit for duty,” Owens said.

Carpaccio Owens blocks a kick delivered by James Tomko as they practice for the Augusta Extreme Fight Night in Georgia in 2007. (Army)

His first introduction to the new Army Combat Fitness test was during the sweltering heat of the North Carolina summer this year.

Owens said he was asked if he wanted to be a level 2 grader, meaning he will evaluate soldiers who take the test when it goes into effect and determine their scores.

However, on Nov. 6, Owens received an unofficial max score for the new test’s six events.

Lt. Col. Jose Durbin, director of human performance and endurance for the 82nd Airborne Division, said scoring is based on a soldier’s military occupation specialty.

The “green level,” is considered the maximum level.

“So Maj. Owens exceeded these levels on all events, which is a pretty significant thing,” Durbin said.

Durbin said the only reason why Owens’ score is considered unofficial is because the Army is giving a time limit of 90 minutes to complete all of the events.

He said Owens went over that time limit because there were more soldiers per lane or event taking the test that day.

“But Maj. Owens is such a phenomenal soldier and athlete that he would have maxed it anyways,” Durbin said.

Owens, who hopes to one day own his own gym geared toward kids, said he wants to encourage and help other soldiers who prepare to take the test.

“As we start going down this road for the ACFT, you need someone to be that person to make you uncomfortable, allow you to be comfortable being uncomfortable,” he said. “

Owens said he views it as a combination of having someone to “tap” into their potential, while the soldier dedicates himself or herself.

” I think being successful … in this ACFT gives me a little bit more time in order to provide for my family, reach my goals, small goals or objectives while I’m in the military and continue to be an asset to my organization,” he said of his advice.

President Donald Trump made his first trip to Afghanistan to spend Thanksgiving visiting the troops and meeting with Afghan President Ashraf Ghani. During his 3-1/2 hour surprise visit, Trump served dinner and spoke to the service members at Bagram Airfield where he told them he believes the Taliban want a cease-fire.