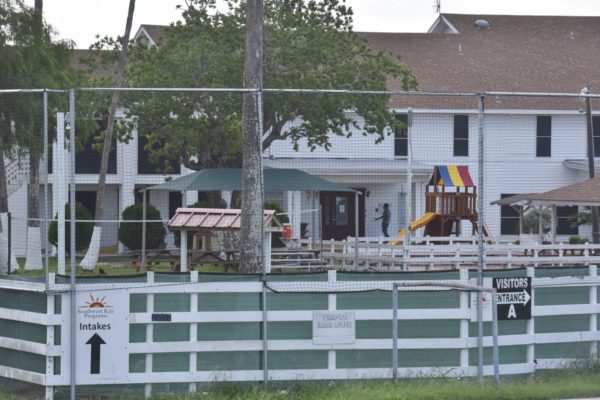 Southwest Key Programs, a Texas-based nonprofit organization, runs this Harlingen facility that houses immigrant children who have been separated from their families at the U.S.-Mexico border. (Jahi Chikwendiu/The Washington Post)

The former leader of a nonprofit organization that shelters migrant children for the U.S. government resigned this year after it was publicly disclosed that he earned nearly $1.5 million in 2016. New tax records obtained by The Washington Post indicate he earned more than double that — $3.6 million — in total compensation in 2017.

Juan Sanchez, founder of Southwest Key Programs, the Texas-based nonprofit that houses thousands of children and teens for the Department of Health and Human Services, left his job on April 1 amid outrage over his compensation and business dealings. Members of Congress fumed about individuals profiting off migrant detention just as the Trump administration was separating migrant families at the U.S.-Mexico border, prosecuting adults for illegal entry and shuttling their children to Southwest Key and other shelters.

Southwest Key is one of the main contractors involved in housing unaccompanied migrant children as they wait to be placed with family members or sponsors, housing approximately 4,500 minors in Texas, California and Arizona. The organization cares for just more than one-third of the 12,500 minors in HHS custody. Southwest Key has an annual contract of approximately $460 million a year to shelter children, and federal records show the nonprofit has collected more than $1.1 billion since 2014.

Housing children during the migrant crisis has created a major financial strain for HHS, which in May suspended English classes, soccer and legal aid for children until Congress approved a $4.6 billion supplemental funding package that included money for migrant care. But it also has created a boon for those who provide HHS housing, with contracts worth hundreds of millions of dollars; BCFS Health and Human Services recently received a $300 million contract to run an emergency shelter in Carrizo Springs, Tex.

Southwest Key is one of several contractors that have come under scrutiny during the migration surge that has led to the U.S. government’s crackdown on illegal immigration.

[‘I hate this mission,’ says operator of new emergency shelter for migrant children]

Sanchez’s income is detailed in a tax filing by Promesa Public Schools, Inc., a subsidiary of Southwest Key that manages the nonprofit’s Texas charter schools in Austin, Brownsville and Corpus Christi. Southwest Key’s separate tax returns are due this month and will not show additional income for Sanchez, according to a Southwest Key official who spoke on the condition of anonymity to discuss details that have not yet been released.

Sanchez did not respond to a request for comment. A representative for Sanchez declined to comment and referred questions to Southwest Key.

In an interview last year, Sanchez told The Post that his salary increase in 2016 reflected a retirement contribution rather than a pay bump, noting that he for years had worked for a low salary and no benefits. He said Southwest Key’s work was critical to providing a safe environment for children.

“We had nothing,” he said in June 2018, referring to the early years of Southwest Key. “No benefits, no 401(k), no insurance. We just go out there keeping kids out of prisons and jails.”

In 2017, Sanchez received more than $1 million in cash payments — nearly $784,000 in base salary and $238,500 in bonus pay, according to records filed with the Internal Revenue Service and obtained by The Post. Sanchez’s largest source of income was $2.5 million paid in a cash-value life insurance and retirement policy.

Joella Brooks, the interim chief executive of Southwest Key, said Sanchez’s increase in compensation “had nothing to do with the number of youth in our care.” She attributed the increase to the life insurance and retirement policy the Southwest Key board approved for Sanchez, Brooks and a few other organization leaders.

[Inside Casa Padre, the converted Walmart where the U.S. is holding nearly 1,500 immigrant children ]

Brooks said the life insurance policy has since been discontinued and that Sanchez “forfeited hundreds of thousands of unvested dollars from this program as a result of his departure. That money has been returned to Southwest Key.”

Other executives who have left Southwest Key have been required to return a significant amount of unvested funds, and Brooks and other leaders agreed to return portions of the life insurance benefits they received, according to Southwest Key.

Sanchez also has a financial stake in a Southwest Key shelter in Conroe, Tex., which the nonprofit said he is trying to sell.

Several of Southwest Key’s top executives have resigned in recent months, and Brooks said the nonprofit has hired a new chief financial officer, reexamined pay incentives and that the organization is trying to steer itself in a different direction.

“The new team I’m building in Austin is committed to transparency and doing all we can to continue the good work done in the decades of Southwest Key’s existence and address issues related to decisions made in the past,” Brooks said. “As the leader of our organization, I am committed to taking corrective action when necessary and restoring the faith and trust in our operations.”

Brooks’s pay package totaled $488,000 in 2016, the most recent year available for Southwest Key. She was the chief operating officer at the time.

Among the top officials who have departed in recent months are Sanchez’s wife, Jennifer, a former Southwest Key vice president who earned more than $510,000 in 2016, according to financial records.

Southwest Key’s former chief financial adviser, who earned $1 million in 2016, also stepped down earlier this year after the New York Times detailed allegations of mismanagement and possible wrongdoing at Southwest Key, leading to an internal investigation and a separate Justice Department probe. The vice president for immigrant children’s services at Southwest Key earned nearly $1.4 million in 2017, more than double her pay the year before, according to Promesa’s 2017 tax filings. That official left Southwest Key on Friday, according to the nonprofit.

The two former officials could not be reached for comment.

Brooks said Southwest Key has been a state-licensed child-care provider for more than 20 years, caring for underage children who arrive at the U.S.-Mexico border without a parent or guardian. Most of the children are from Guatemala, Honduras and El Salvador, and they stay at the shelters for an average of 30 to 40 days.

She said the nonprofit’s shelters — including Casa Padre, which houses more than 1,000 minors in a converted Walmart in Brownsville, Tex. — provide classroom education, recreation, arts and crafts, music, entertainment and field trips.

Most shelters are smaller, housing 100 to 150 minors in dormitory-like settings.

“I’m proud of the tens of thousands of lives we’ve helped change for the better across decades of service,” Brooks said. “And we stand ready to help tens of thousands more who want to pursue a better future for themselves.”

HHS officials have said they are on track this fiscal year to shelter the largest number of unaccompanied children in their history — more than 63,000 so far, already exceeding last year’s total. Under federal law, HHS is required to feed and house the minors until case workers can place them with a parent or another vetted sponsor to await their immigration proceedings in the United States.

Sanchez, 72, who said he holds a doctorate in education from Harvard, was raised on the Mexican border in Brownsville. He founded Southwest Key in 1987 to focus on juvenile justice programs. The organization shifted in the late 1990s to running shelters for migrant children, and as its numbers grew, his pay soared.

He earned $786,222 in 2015, according to forms submitted to the IRS. The next year, his Southwest Key pay package nearly doubled to $1.48 million, according to the IRS forms filed by the charter schools.

U.S. Rep. Sylvia Garcia (D-Tex.) has criticized Southwest Key because of “allegations of self-dealing and abuse reported from their facilities,” and she has called on federal agencies to stop working with the organization. When Sanchez resigned, Garcia lauded the move but said it would do little to fix the problems, and she vowed to continue to oppose the organization’s work with children: “His resignation will in no way shift our commitment to holding Southwest Key Programs accountable for their negligence and misconduct.”