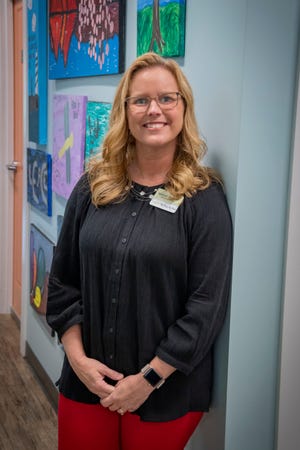 The Dragonfly House, with its unique name and meaningful name, is an advocacy center for children of all forms of abuse. With a lot of determination, love and hard work, Brandi Reagan, executive director, has seen the center through almost a decade, helping thousands of children.

The center began in 2010 after Reagan wrote a startup grant in 2009. She had been working in the local domestic violence office and worked with adult victims. Upon learning each victim’s story, she realized a large majority were abused as children.

“It was in (spring) of 2009 and our office did weekly support groups. During this specific group, there were eight women there, and one of them was talking about what she had gone through as a child, her own abuse, and I guess that triggered something. All eight women disclosed that they had been abused as children,” Reagan said. “Some of them had never spoken of it before that day.”

She knew that there was a possibility to change the cycle with the abused children, but at the time, there wasn’t anywhere in the county for children to go.

“If it was an extreme case of abuse, the child would be sent to Brenner (Children’s Hospital), but the hospital wasn’t an advocacy center,” Reagan added.

Story behind the name of Dragonfly House

Editor’s Note: This story is often thought to represent death, however, it was a great metaphor for Brandi Reagan, Executive Director of the Dragonfly House, an advocacy center for victims of all forms of child abuse, to explain the hope and healing that exists after abuse. The name “Dragonfly” House is named after this story.

Once, in a little pond, in the muddy water under the lily pads,

there lived a little water beetle in a community of water

beetles. They lived a simple and comfortable life in the pond

with few disturbances and interruptions.

Once in a while, sadness would come to the community when one of

would never be seen again. They knew when this happened; their

Then, one day, one little water beetle felt an irresistible urge

to climb up that stem. However, he was determined that he would

not leave forever. He would come back and tell his friends what

he had found at the top.

surface of the lily pad, he was so tired, and the sun felt so

warm, that he decided he must take a nap. As he slept, his body

changed and when he woke up, he had turned into a beautiful

blue-tailed dragonfly with broad wings and a slender body

So, fly he did! And, as he soared he saw the beauty of a whole

Then he remembered his beetle friends and how they were thinking

by now he was dead. He wanted to go back to tell them, and

before. His life had been fulfilled rather than ended.

But, his new body would not go down into the water. He could

not get back to tell his friends the good news. Then he

understood that their time would come, when they, too, would

know what he now knew. So, he raised his wings and flew off

into his joyous new life!

And so began the journey to creating the Dragonfly House, serving Davie and Davidson counties. The first three months of grant funding went to securing a location, getting supplies and receiving training. It opened to take its first case in October 2010. The center serves boys and girls, birth to 17 years, and addresses all types of abuse. The focus of their work encompasses four main areas: forensic interviews, child abuse medical exams, victim advocacy, trauma and mental health services, and community outreach and education.

The center was expected to see 20 children within the first year of service after Reagan pulled the data from the Department of Social Services on how many cases went to Brenners Children’s Hospital. They finished the first year with 225 cases and now average between 350 and 400 cases a year.

The following story appears in the Aug. 2020 edition of Davidson Living magazine. If you would like to read more articles and view more photos like this, please pick up a copy of the magazine at various locations through out the county, or call the circulation department at (336) 248-5980 to subscribe so issues will be mailed to your home.

Despite the large number of cases, the 10 plus employees who make the Dragonfly House a possibility, each child is special and memorable. Reagan said she knows there is hope and healing in what she does and often shares success stories that have touched her heart.

“There were two little girls. Mom and dad were separated. When the girls stayed with their dad, they would all sleep in one bed and one weekend, the older girl told the mom she didn’t want to go to her dad’s,” Reagan said.

The older girl finally admitted what her dad was doing to her at night and she was afraid he would start harming her sister. The mother immediately called law enforcement and the Dragonfly House was contacted.

“She said something that stuck with me in her interview. She said, ‘He did things to me that no one should ever do.’ ” Reagan said.

The father was charged and became a 30-year registered sex offender. Both girls went to therapy and the mother went through the support group. The mother even went through court to have their last names changed so they wouldn’t have to live with his last name.

“The girls are doing really well. They are going to be OK. We know that,” Reagan said.

But not every story has a happy ending.

“I have (cases) that I have to separate myself from and try not to take them home with me,” said Graham Harmon, crime victim advocate at the Dragonfly House. “I hate to see the kids come back. We have some repeat clients. Either they didn’t disclose everything the first time or (there was) reunification of the family. A lot of people that don’t do this kind of work think the kid is lying or making things up. But these are not things kids make up.”

Reagan said while all cases are difficult, coming from every socio-economic background, her most difficult were the physical abuse cases.

“In our world, the physical abuse cases are harder to work, because you see what they did. You are looking at all the marks on the body, how many times and how hard they were hit. Sexual abuses cases you don’t have that visual. Your mind really stops you from going to how the child was groomed or the sexual acts. Physical abuse cases are really hard to work for me,” she said.

In the second year of being open, when Reagan still completed a lot of the medical exams, a middle school boy came through the Dragonfly House for physical abuse. He got in trouble at school and his father beat him.

“His dad beat him all night long. He would stop and then come back for another around, not letting him sleep. It was one of the most horrific physical abuse cases I have ever seen,” Reagan said

However, the boy never told. His teacher noticed he was wearing long sleeves in the summer and could see red marks underneath. She promptly called in law enforcement. The child’s father received felony charges and the boy is doing well, Reagan said.

COVID-19 changed a lot of the way the center now operates. Due to the pandemic, The Dragonfly House had to cancel its largest fundraiser, which brings in a projected $100,000 of operating funds. This will affect the center for two years. Staff works from home, if possible, unless children have appointments. The work load has diminished for the short time, but Reagan said she knows these instances of abuse are still occurring, as many cases are brought to light at school with the counselors or teachers and are now going unseen.

“It is not in every child’s best interest to be home,” Reagan said. “At school there is at least an outlet, there’s friends, there’s structure, and someone they can talk to. When they are at home, they are literally trapped with no hope.”

Each staff member emphasized abuse happens so often, in the nicest neighborhoods to the worst most backwood areas. It doesn’t discriminate against race, gender or socioeconomic status.

“It’s not one single story that makes me do this work,” said Heydy Day, child advocate at The Dragonfly House. “I see a lot of different faces and families. It’s knowing that it happens globally and how society doesn’t want to think this happens. I see a lot of little faces. They are all with me and that’s why I do what I do.”

Rebekah Cansler McGee is the executive director of Uptown Lexington and a former reporter at The Dispatch newspaper.