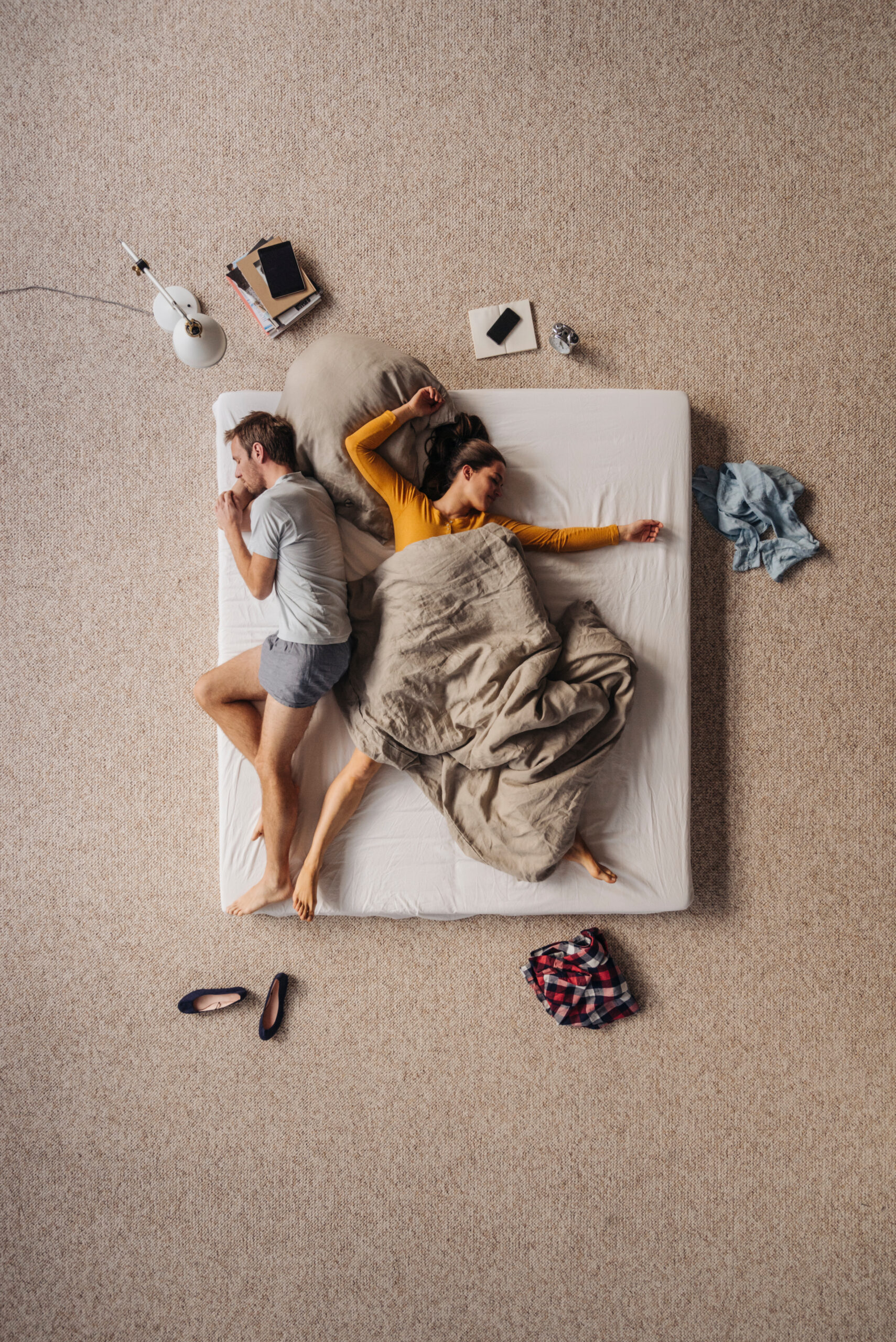 But what if your partner is the cause?

In a recent study, two thirds of those struggling to sleep blamed a partner’s snoring, while one in five argued about it regularly.

One in four of us says a bedmate who hogs the duvet makes us see red, and an amazing one in six has ENDED a relationship over it.

Perhaps that is why one in six couples who live together sleep apart.

Here, Claire Dunwell speaks to four couples for whom sharing a bed has pushed their relationship to breaking point – and expert Lisa Artis, of The Sleep Charity, offers her advice.

‘I’m scared he’ll lash out during the night’

CLEMENTINE SALMON, 35, says her husband Joe, 36, keeps her awake with his fidgeting.

She is scared that Joe – a coffee business owner who is keen on martial arts – might lash out accidentally in his sleep.

“I NEED a lot of sleep to function. But with Joe and three young children, it’s hard to get enough.

“Joe jumps and twitches in bed and once he disturbs me I can lay awake all night.

“At 6am it’s time to get up with the kids, so I feel exhausted.

“If I don’t get enough sleep, I know I will have a bad day and I lay awake thinking how I won’t be able to cope if I’m a zombie mum – and that makes me feel guilty.

“I get angry and resentful because it feels like the lack of sleep is ageing me while Joe wakes up refreshed.

“Our sex life is affected too because I’m exhausted, and Joe comes to bed too late.

“I go earlier so I can catch a couple of hours good sleep before he gets in bed and wakes me up.

“Joe doesn’t remember a thing the next morning.

He says I’m making it up which causes arguments, ­especially when the tiredness makes me irritable.”

Joe says: “With three kids under five and running my own business, life can be stressful. I often go to bed past midnight.

“I have no idea I’ve woken Clem in the night until she tells me.

“She reminds me of it on a daily basis but I don’t feel bad.

“There’s nothing I can do about it and I’d hate to move into separate beds.

“Hopefully when I’m less stressed with work and the kids are older, Clem will get better sleep.”

Lisa says: “Hypnagogic jerks are when we twitch and jump as we are falling asleep.

“REM sleep disorder is when we act out vivid, action-filled, often unpleasant dreams by shouting or kicking.

“Episodes can occur occasionally or several times a night.

“Joe should see his GP.

“He should also keep regular hours for bed and have a wind-down routine to keep stress low.

“A restful bedroom – cool, quiet and dark, with no clutter and with a comfortable bed – helps.”

CARL COLLUMBELL, 41, has slept on the sofa for the past seven years because his partner Laura Stones, a 29-year-old beautician, likes their bed roasting-hot.

Carl, a DJ, who lives in Derby with Laura and their kids Theo, four, and two-year-old Marley, says:

“IF I sleep with Laura, I get too hot and I disturb her if I’m tossing and turning.

“Seven years ago, I started sleeping on the sofa and have stayed there ever since.

“Laura used to moan about us sleeping apart but it’s become a ­routine.

“She’s grumpy if she doesn’t get her sleep, so it’s easier for me to stay downstairs.

“There’s too much body heat when we’re sleeping in the same bed and even though we bought a king-size, thinking it would help, I still struggle.

“When we tell friends we sleep apart, they think it’s odd.

“It would be great to be in the  same  bed, especially for my aching back.”

Laura says: “Sleeping apart from Carl means sex is never in the spur of the moment.

“We’ll watch a film together in bed, have sex, then Carl goes down to the sofa. It isn’t very romantic.

“If I’m really tired from looking after the boys all day I struggle to keep my eyes open for long.

“I’m sure if Carl stayed in our bed our sex life would be better and although we have got used to the way things are, I would love to go to bed, and wake up with Carl.”

Lisa says: “Comfort is subjective. Being too hot or too cold in bed causes restlessness, so it’s important to get the right balance for both bed partners.

“The ideal bedroom temperature should be between 16C and 18C.

“Look at having separate bedding with a higher-tog duvet on one side and lower on the other.

“Some mattresses can be warmer than others too, so it might be worth looking at making a swap.”

‘She’s snored since being pregnant… 5 years ago’

DIGITAL copywriter Peppa Thewlis, 42, sleeps alone because she keeps her husband awake with her heavy breathing.

She lives in Wakefield, West Yorks, with husband Matt, 33, a plasterer, and their daughters Sophie, five, and three-year-old Emily. Peppa says:

“THE heavy breathing began when I was pregnant with Sophie.

“We had a big sofa in our old house, so Matt started going downstairs in the middle of the night.

“When Sophie was born, I hoped things would improve. But every time Matt tried to get a good night’s sleep, my noises woke him up.

“We had arguments because he spent most of the night nudging me.

“Neither of us was getting quality sleep.

“Now Matt sticks to the sofa, except on holidays when we have no choice but to share the same bed.

“It never works and we end up snapping at each other.

“When he comes upstairs to get dressed in the morning, I tell him to get out of “my” bedroom.

“We’re a married couple and it would be nice to go to sleep and wake up together.

“I used to love nothing more than snuggling up with Matt in bed feeling safe and loved.

“I wish we could get that back.

Matt says: “As a a kid, I took all the batteries out of clocks because I couldn’t stand the ticking.

“Peppa used to be a quiet sleeper until she got pregnant. Then her breathing got heavier and louder.

“I was constantly waking her up, which wasn’t fair.

“I decided to sleep on the sofa and I’ve been there ever since.

“It isn’t the ideal situation but not being able to get a good night’s sleep was really frustrating.

“I would lay awake clock watching all night.

“I’m sure if we shared the same bed sex would be spontaneous, which I miss.”

Lisa says: “Fifty per cent of sleep disturbance is caused by sharing a bed.

“See a GP for advice and to rule out a condition called sleep apnoea.

“It might also be worth investing in a bigger bed so there’s more space and less chance of you disturbing each other.”

‘Our expensive mattress didn’t fix my back woes’

TONI PARKER, 31, suffers with a bad back and wishes the bed she shares with her partner was firmer.

The risk analyst lives in Bermondsey, South London, with Steve Davis, a 38-year-old printer. She says:

“MY back got a lot worse during lockdown because I don’t have a proper office chair and desk.

“It’s difficult to find a comfortable position in bed and I’m constantly moving around.

“I’ve tried pillow sprays, bubble baths and shower gels to get a good night’s sleep but nothing works.

“We have a memory foam mattress and I wish it was firmer.

“I paid £600 for it five years ago and as soon as I got it home, I knew I’d made the wrong choice – ­especially after sleeping on it for a few nights.

“By then, it was too late to send it back and we can’t afford a new one at the moment.

“Steve can sleep anywhere and it causes arguments between us when I don’t get enough sleep.

“It’s a vicious circle because the later it gets, the harder I try to get to sleep.

“The harder I try, the longer it takes and I worry about being tired next day.

“If I haven’t slept well, I’m irritable  the  next  day,   over the smallest things.”

“I’m ready to go to bed around 10pm, while she stays up until the early hours and wakes me as she gets into bed.

“Once she’s in, she moves around a lot.

“It’s only when she’s asleep that I can nod off.

HOW GETTING IT ON CAN HELP YOU TO NOD OFF

“Go to bed earlier, so you have plenty of time for sex before you need to sleep. You could start off by giving each other relaxing massages in a dimly lit room.

“If you’re sleeping separately, you’ll need to work harder to feel connected to each other.

“So before bed, hold hands, kiss, or snuggle up on the sofa watching TV as much as possible. Skin to skin contact and affection is important in a relationship.

“And grab a quickie whenever you’re both in the mood – sex decreases your stress levels, so it will help you work out these issues without getting annoyed.”

“I find our mattress comfortable.

“Lack of sleep doesn’t affect me but Toni can be grumpy the next day if she doesn’t get enough.”

Lisa says: “A good bed, providing correct support and comfort has an important role in relieving and preventing back pain.

“It can also stop tossing and ­turning.

“Look for a mattress that is firm on one half and soft on the other, or a zip-and-link mattress where two zip together down the middle.”