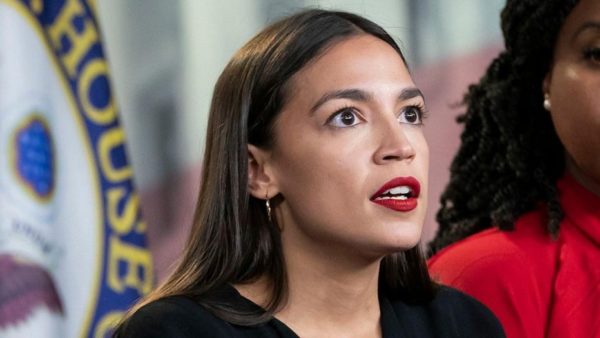 “Even while I was on vacation, I woke up in the middle of the night, at 3:30 in the morning, just concerned about climate change,” Ocasio-Cortez said in an Instagram livestream recently.

Ocasio-Cortez even wondered if, in a world with a changing climate, she should have children. “I’m 29 years old,” she said. “I really struggle sometimes with the idea of how to be a policymaker and potentially have a family in the time of climate change. And it really, like, freaks me out and it can be really, really scary.”

Wow, that’s depressing. I almost feel bad for her.

Ocasio-Cortez’s post came just one day after she lamented that there could be an untold number of ancient diseases hidden within glaciers, and that if those glaciers melt because of climate change, well, humanity could be in huge trouble.

“Scientists fear that there’s a potential that a lot of diseases could escape these melted glaciers, things that were frozen for thousands of years, and that they’re going to get into our water,” Ocasio-Cortez said, “and that humans could contract them, and they are going to be diseases that are thousands of years old that have vectors that we are not prepared for, that we have never seen.”

On other occasions, Ocasio-Cortez has warned that climate change will cause the dangerous sea-level rise and lead to deadly increases in mosquito populations, along with dozens of other horror stories.

I suppose if I believed that climate change will cause oceans to swallow up whole cities and release killer diseases that could wreak havoc on the human race, I, too, might think twice about bringing more humans into the world. But unlike Ocasio-Cortez, I have absolutely no trouble sleeping at night, and when I do, it sure as heck isn’t because of climate change.

Does the evidence show Earth has warmed over the past century? Yes, of course. Is warming likely to continue for the next several decades, at least? Yes, probably.

The hard data overwhelmingly shows that recent warming has not been catastrophic and that humans are better off in our moderately warmer world.

But the available evidence shows that warming is not dangerous and not likely to be catastrophic, despite numerous dire reports from climate alarmists like Ocasio-Cortez and biased government agencies, which are often more interested in accomplishing political goals than engaging in real scientific inquiry.

For example, the evidence clearly shows that sea-level rise is not accelerating at a dangerous pace and that it’s in line with sea-level rise measured prior to the widespread use of fossil fuels.

And I know this will come as a shock to Ocasio-Cortez and her climate alarmist acolytes, but the hard data overwhelmingly shows that recent warming has not been catastrophic and that humans are better off in our moderately warmer world that they would otherwise be, because lower global temperatures are associated with more significant societal problems, like famine and weather-related deaths.

As James Taylor, my colleague and a senior fellow in environment and climate issues for The Heartland Institute, noted in a recent policy study, “During the past 150 years, as Earth has emerged from the Little Ice Age, the warming climate has brought immeasurable benefits that continue today, including crop yields that have set records in the United States and globally nearly every year.

Taylor isn’t alone. Numerous scientists have made similar observations in recent decades, a reality the mainstream press continues to ignore. For example, noted meteorologist Joe Bastardi, who now serves as the chief meteorologist at weatherbell.com, has found that “in the fossil fuel era, in spite of a four-fold increase in population,” the number of deaths related to climate has “plummeted.”

Patrick Michaels, Ph.D., a former senior fellow in environmental studies at the Cato Institute, noted in 2018, “we don’t live in the best of all possible climates,” adding, “So what’s happened as it’s warmed this half a degree in the late 20th century and the CO2 has gone up and up in the atmosphere, well, what we’ve done is we’ve created a greener and greener planet and the greening of the Planet Earth is profound.”

If Ocasio-Cortez had it her way and the country was forced to abandon oil, natural gas, and coal — one of the most important provisions in her “Green New Deal” plan — more than 100 million acres of land would need to be consumed by solar facilities and wind turbines. That’s a landmass larger than the state of California. How many hundreds of millions of animals and countless animal habitats would need to be wiped out in the name of “saving the planet”?

And where does Ocasio-Cortez think all of the required rare earth minerals needed to build and operate those windmills and solar panels would come from? Someone is going to have to dig them out of the earth, destroying even more land. And in some cases, the only place to find these materials is in countries with notorious and abysmal human rights records, like the Congo, which has frequently experienced intense violence dnd even permits child labor.

Millions of dead animals, more than 100 million acres of destroyed land, significantly higher energy costs, and child labor — now, that sounds like a nightmare worth keeping you up at night.

Will global warming cause some problems, yes, but probably not nearly as many as proposals like the Green New Deal. And whatever problems do come humans’ way will likely be outweighed by the benefits of warming and could easily be dealt with through technological innovations, human ingenuity, and, if necessary, behavioral changes.

So, Rep. Ocasio-Cortez, feel free to have as many kids as you’d like and sleep well. Humans are going to be just fine!