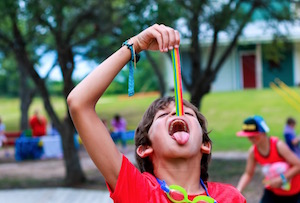 This is the first post in a two-part series. It is both a fable and a true story, and it is not about what it seems to be about.

One summer a few years ago, about 200 Bay Area kids were enjoying a 10-week stay at Camp Sweet Dreams, nestled by a crystal blue lake in the Sierras. Their halcyon days were filled with horseshoes, archery, canoeing, raft diving, pingpong, capture the flag, friendship bracelets, bad ukulele, and really bad plays. And also: lots and lots of sugar. The mess hall offered very popular, very sweet desserts, and the camp commissary sold lots of candy and sodas. When the parents came to visit after two weeks, they were glad to see their kids so happy, but worried about all the sugar and the habits they were going to bring home with them. So the parents asked the camp staff to limit the sugar their kids were eating and help them to develop healthier eating habits.

Camp administrators agreed that this was a reasonable request — they hadn’t been paying much attention, and could see now that it was getting out of hand. They offered to taper the kids off of sugar, not to zero, but to much less, and settled with the parents on a 60% (or so) reduction. The parents went home satisfied, and the administrators gathered in a room to discuss next steps.

The camp staff were worried about more than the kids’ health. While they certainly agreed that so much sugar was not ideal, they were also worried about the kids’ happiness. Although the parents were paying for the camp, they knew that the kids had a big say in deciding which camp to go to. The camp staff needed to be sure the campers had a great time so they would come back next year. How could they cut so much sugar out of their diet while still keeping the kids happy?

Camp Sweet Dreams was a very contemporary camp in some ways, particularly when it came to promoting leadership and teamwork.They decided to involve the kids in this planning process, figuring they would probably be more satisfied if they were involved, plus the kids might have some good ideas. So the CARB Committee was formed, consisting of three staffers and three kids, to figure out how best to reduce the sugar in the kids’ diets. The staffers were the camp nurse (and unofficial dietician) Mary, head chef Stan, and commissary manager Augie. The kids on the committee were a big 14-year-old named Chev, who loved to play flag football and flip over other kids’ canoes; a quiet 12-year-old named Wespa, whose favorite activity seemed to be endless games of hearts and Uno out on the lounge deck; and an energetic 13-year-old named Valerie who enjoyed pranking the other campers when she wasn’t speed-racing around the site on her custom skateboard. The kids had little in common with each other except for one critical thing, namely their love of sugar. Worried about the impending sugar withdrawal, they were the first to volunteer for the committee, hoping they could find a way to make things less bad.

Nurse Mary outlined the plan they had agreed upon with parents. There were eight weeks of camp left, so each week they would reduce the amount of sugar the kids ate by about 10%. By the end of camp, their sugar intake would be almost 60% less than today. This gradual reduction would be easier for the kids and would allow them time to develop better habits. When they went home, their parents would notice their good choices and they would continue on with a healthier lifestyle. The kids agreed that made sense, though privately worried about the 10% each week. The first week or two wouldn’t be so bad, but it would get pretty bad after that. They had to find a way to push back on this.

Mary continued. Most of the sugar the kids eat comes either from the mess hall (mostly the desserts) or from the snacks the kids buy at the commissary (mostly the sodas and candy). To keep things simple, she proposed keeping track of only those things, adding that the kids would need to note their consumption and fill in a form each night for their counselors. “WHAT?” exclaimed the kids. “That is a lot of work! We don’t even want to do this sugar reduction!” Mary said she understood, but the camp had promised the parents and wanted to have some data to show their progress. The kids put their heads together, and young Wespa had a suggestion. “Look, we’ll do desserts at the mess hall and sodas and candy at the commissary. But that’s it. It’s a lot of busy work when we’re supposed to be having fun. All we ask is that you don’t make any more rules. Just this one, okay?” “No problem,” agreed the staff, since this one would do the job.

Stan offered to research lower sugar desserts for the mess hall. He’d been using a Paula Deen cookbook and had a sense there might be some low-hanging fruit. He thought he could reduce sugar by 10% each week without much trouble. Augie said he would generously stock the store the first week, based on the most the kids were likely to buy. Then he would decrease the amount of candy and soda by 10% or so each week after that.

Chev’s head jerked up from the table where he’d been dozing. What if they ran out? He didn’t think he could live without his daily dose of Snickers and Mallo Cups. “Uh, wait a sec. You know, me and my buddies, we’ve been thinking of going to Camp Nevada, down the street, and they have a great commissary. If this one gets really bad, I don’t see how we can stay at this camp.” Wespa also chimed in. “If the commissary can’t sell as much candy, Augie’s going to jack up the prices. That’s not fair. Plus with prices changing each week, we won’t even know how much money to bring to camp anymore. It’s not going to work.”

The staff huddled in a corner. They needed to keep the kids on board, but there were some sugar-addicted kids like Chev who really might leave, and some kids without much extra money. “Okay. Each week we’ll give some free candy bars to the kids who are most in need.. We’ll get a list of those kids together soon, no worries. Anything else?”

Valerie, who had been pretty quiet until now, raised her hand. “Oh, yeah, I just remembered, one more thing. Sometimes we buy candy from the commissary at the camp next door. They have these chocolate-covered peanut butter bars that are soooo good.” Chev shot her a look (“What are you doing?!”), but she tapped his knee and kept going. “Do you want to count those too?” “Why Valerie,” said Mary, “what a great suggestion.” So they added the candy from Camp Summer Shuffle to the list of things to track.

“Anything else?” asked Stan. No one said anything, so they got up to leave. Mary offered to figure out how much sugar the kids were eating, based on reports from the mess hall and the two commissaries. Then she’d work with Stan and Augie to determine the needed reductions. On their way out, staff noticed the kids high-fiving each other, but just shook their heads. Kids will be kids after all…

The first week went swimmingly. Augie’s store was fully stocked with the usual goods, plus a few low-sugar sodas, and Stan managed to cut the sugar in the desserts by 15% with no one noticing. The kids dined away as usual, a few bought low-sugar soda, and the candy flew off the shelves. In fact, there was so much candy in stock that they could eat the usual amount and stash away a bunch for later in the summer.

The second week also went by easily. Stan cut the portions a little, and the diet soda was now half-price, so more kids opted for it, using the money they saved from the diet soda to once again buy up all the candy they could from the two commissaries, stashing away a good portion of it for later.

The third week looked to be a little trickier, but Valerie had an answer. She’d convinced the manager at the Camp Summer Shuffle commissary to begin reporting the peanut-butter bars as energy bars rather than candy bars. That meant they could keep buying them but it would look like their sugar went down. Score! There was also a light stomach bug running through the camp, which depressed appetites a little. The kids easily hit their sugar reduction mark for the week, and again bought out the commissary and stashed away a lot of candy.

Mary grew worried. While technically the camp was meeting its sugar targets, most of the kids weren’t adopting good habits, and it seemed like some of them were even eating more sugar than before. The head counselor Jack suggested some tighter controls. He could see that much of the sugar eating was going on at night, in the cabins or at the outdoor theater they had set up for movie nights. That would be a really good habit to break, and it would be effective. He called for a meeting of the CARB committee, related what he’d seen about night time snacking, and proposed a plan to restrict sugar in bunks and at movie nights. The staff members agreed it made sense, but Valerie and Chev turned to Wespa, who ruefully shook her head. “I’m sorry,” Wespa said, “but camp staff agreed that we would not create any more rules. It’s just too much for campers to keep track of and worry about. This one rule is working just fine — all the reports show we are eating less sugar — so let’s just stick with that.”

Camp Sweet Dreams went into its fourth week of sugar reduction. Augie was offering less candy but the kids had so much stored away that it didn’t matter. They traded happily amongst themselves, and rarely bought from Augie, who couldn’t lower his prices past a certain amount. Augie was losing money and now struggling to discount the diet soda. Stan had gone through the low-hanging fruit and was having trouble finding more easy and affordable ways to reduce sugar at the mess hall. And Mary could see no improvement at all in the kids’ choices, except for some preference for the deeply discounted diet soda. Their foolproof plan to reduce sugar sure wasn’t working, and they had only four more weeks before facing the parents. What could they do to fix this mess?

Please share your suggestions in the comments, and we’ll continue the saga in next week’s installment…

P.S. If anyone knows what this post is actually about, please share it in the comments. (Hint: It’s not about kids and sugar and diet, though that is meant to make it more relatable.)

P.P.S. Extra-credit if anyone can explain any of the names of the characters or the camps.

Notes and References
1. For more on the problems with CARB’s plan (aspiration?) to continue to achieve the needed reductions, see here or here.

Comment Guidelines
I hope that your contributions will be an important part of this blog. To keep the discussion productive, please adhere to these guidelines or your comment may be moderated:
– Avoid disrespectful, disparaging, snide, angry, or ad hominem comments.
– Stay fact-based and refer to reputable sources.
– Stay on topic.
– In general, maintain this as a welcoming space for all readers.

Please make sure your comments are truthful, on-topic and do not disrespect another poster. Don’t be snarky or belittling. All postings are subject to our TERMS OF USE, and may be deleted if deemed inappropriate by our staff.

See our announcement about requiring registration for commenting.