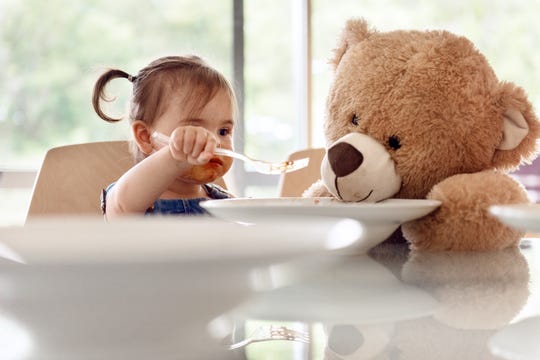 A nutritionist has better tactics for getting a toddler to eat healthy foods. (Photo: lisegagne, Getty Images)

Parents deploy all sorts of strategies to get picky eaters to try new foods. But one man’s tactic is stirring up controversy — and a nutritionist says there are better ways to get toddlers to eat.

In a now-viral video posted on Twitter, a caregiver is shown offering a spoonful of food to a toddler in a high chair. The boy shakes his head in refusal. Then the man punches a Mickey Mouse stuffed animal, prompting the child to immediately accept the food.

“When kids don’t wanna eat… this is what you gotta do,” wrote the user who shared the video, identifying himself later as the child’s uncle, adding #imdead.

Laughs are heard in the background, signaling that the video was a setup — meant to be a joke.

“That’s really not funny. It’s basically scaring and threatening a kid with violence,” one commenter replied.

“That’s weird. None of the kids in my family have needed to be physically intimidated in order to eat,” replied another.

One dad even started a string of his own response videos showing “positive reinforcement” parenting.

Still, the uncle responded to the critics with another video saying, “My nephew saying ‘cheese’ to all your negative comments on the video. He eats normally and is loved by his family. Mind your business and move on if you’re hurt.”

We are moving on — to some of these strategies from Katina Langley, a registered dietitian and nutritionist who offers up some nonviolent ways to get toddlers to eat healthy foods.

She says the man’s tactic could be frightening for the child and have the “opposite effect.”

“Seeing what happens to the stuffed animal when they refuse to eat, that could be very traumatic for that child and could cause a child to overeat and learn bad habits,” Langley told USA TODAY.

Here are some better ideas.

Involve your child in mealtime

“It’s easier to set habits if you do it from the beginning,” Langley said. She suggests allowing your child to be involved with mealtime by letting them pick out healthy foods from the grocery store and using kid-friendly kitchen equipment so they can help.

“When (children) have their own role in preparation of meals they are more likely to eat those foods.”

Involving your children in meal preparation could improve the chances of them eating it. (Photo: monkeybusinessimages, Getty Images/iStockphoto)

Don’t stress too much

It’s recommended that toddlers eat three meals a day and one or two snacks. But they aren’t like infants when they needed a lot, a lot of calories, Langley said.

“As long as child is gaining weight, is growing, and is meeting their development milestones, then there is nothing to worry about.”

If a child is not gaining weight, he or she should see a pediatrician.

But Langley also says that it can take up to 10 times of introducing a new food to a child before he or she accepts it. Offer up new foods alongside a food they already like to better your chances.

Don’t use food as a reward

Using food as a reward or punishing them by taking away food is not recommend and it could set them up for having issues later, Langley said.

It can possibly lead to overeating, obesity or other food problems.

It’s stressful, but most parents have dealt with toddlers not wanting to eat. (Photo: scaliger, Getty Images/iStockphoto)

Picky eating is normal. It’s a phase that typically every child goes through and it will get better, Langley said.

She adds that almost every parent experiences this with their toddler, but the best bet is a pressure-free, happy mealtime with no threatening, no violence and no negative talk.

“You can’t force a child to eat so you provide them the healthy food options and when they are hungry, they will eat,” she said.