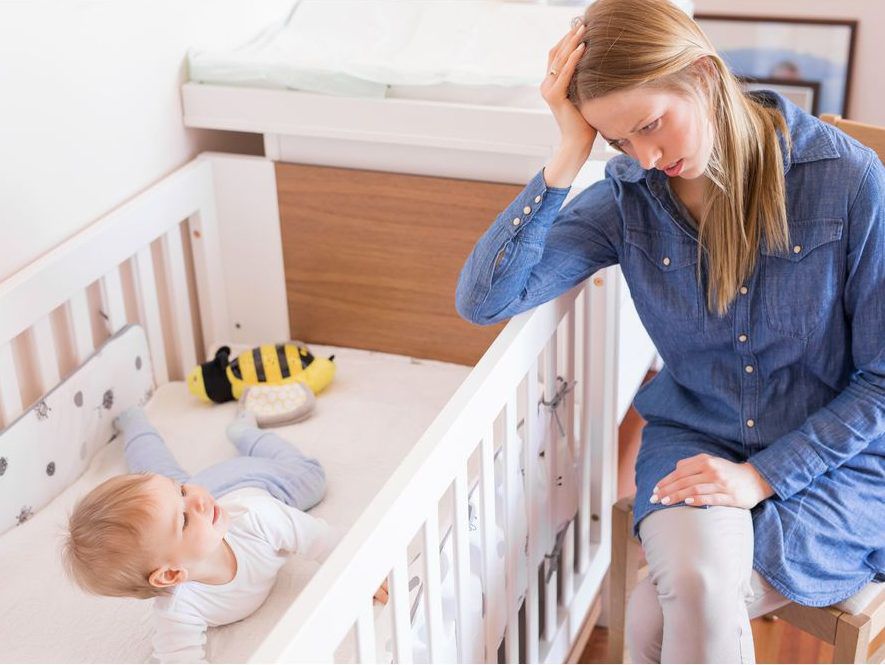 As any parent knows, good sleep is hard to come by. Add any new situation to the mix — caring for a newborn, for example, or sending kids back to school during a pandemic — and getting a good night’s sleep is even trickier.

“When we go through stressful situations, like COVID-19 or buying a house, or even joyous situations, it’s still change,” says Katherine Rasmussen, director of the Behavioral Sleep Medicine Program at Calgary’s Centre for Sleep and Human Performance. “We need to let go of the expectations that your sleep has to be perfect during that transition.”

Given the transitions many people are facing right now, perfect is likely out of reach. But we should all be aiming for good, say the experts. “Sleep is important for everyone,” says Wendy Hall, a professor emerita at UBC who specializes in infant and parental sleep. “If we are going to have reasonable lives, we need to be well-rested.” In an ideal world, she says, moms and dads should aim for seven to eight hours of sleep a night.

Moms with new babies, in particular, have a hard time hitting that goal. And when they do, it’s often cobbled together with interrupted sleep. “That really takes a toll on moms by the time their babies are seven or eight months old,” says Hall. “What I’m discovering now is even after you help the child learn to sleep better, the mothers are still waking up at night because they’re anticipating they’re going to get signals from their babies. Sometimes it’s really hard to help moms sleep again.”

With that in mind, here are seven tips to help moms and dads with young children make the most of their sleep:

1. Don’t hesitate to ask family, friends and community organizations for support. “People who have close relationships with family and friends receive emotional support that helps sustain them during times of transition or difficult times,” says Rasmussen.

2. Give your baby a chance to settle. Hall says in the first few months of their lives, babies often move, make noise and even open their eyes during “active sleep.” Says Hall, “When parents are constantly watching monitors and running in at the first sign of movement, it interferes with the baby’s ability to go back to quiet sleep.” She recommends waiting until a baby truly signals before intervening.

3. Embrace the nap life. “At some point, moms have to try to recoup some of their accumulated sleep debt,” says Rasmussen, “so I highly recommend strategic napping.” Her rule of thumb: nap for 30 minutes or less and finish the nap at least eight hours before bedtime.

4. On days you really need a boost, try what’s called a “caf-nap”: drink one cup of coffee and then lie down for 30 minutes, advises Rasmussen. Caffeine kicks in after 20 minutes, so “you’ll have the restorative effects of having a nap and the caffeine to help you through the rest of the day.” She also recommends breastfeeding moms follow caffeine-intake guidelines and drink coffee only when needed, so the caffeine is more effective.

5. Try to put your baby down while drowsy but still awake. Babies get used to being rocked or fed to sleep, says Hall, which becomes an issue when they need those things to fall asleep. “Even putting babies down drowsy as often as you can during the first few months of life can help them figure out how to fall asleep on their own.”

6. Don’t overbook yourself. If you’re running from activity to activity with your little one, your baby’s ability to sleep during the day will be affected. “You would think babies would make up for missed sleep during the night, but that’s not the case,” says Hall. “They’ll have interrupted sleep and won’t get as much as they need.”

7. If you’re having a hard time calming your mind at bedtime, try deep breathing. “Put one or both hands on your belly and just observe the sensation of your abdomen moving up and down with the rhythm of your breath,” says Rasmussen.

If sleep is an ongoing issue, know help is available. Hall recommends talking to public health nurses or family doctors who can provide sound advice. “Parents need to understand they’re not alone in this,” she says, adding some children just sleep better than others. “Moms and dads need to appreciate they’re doing the best they can.”

Having a comfortable bed is key to getting a good night’s sleep – and one Alberta company is going the extra mile to ensure sick kids rest well. GoodMorning.com, an online mattress retailer based in Edmonton, says demand for its beds has skyrocketed during the pandemic. Now, the company is using the opportunity to give back.

“We’re happy that the demand we’ve seen for our mattresses this spring and summer not only helped people across the country get a better night’s sleep during a stressful time, but that it also put us in a position to give back in a more impactful way,” said founder and CEO Sam Prochazka in a press release.

GoodMorning.com recently partnered with Make-A-Wish Canada to donate $50,000 in new beds to children across the country fighting critical illnesses. One hundred children received new beds in August and another 25 will receive beds in the coming year to help fulfill their bedroom-makeover wishes.