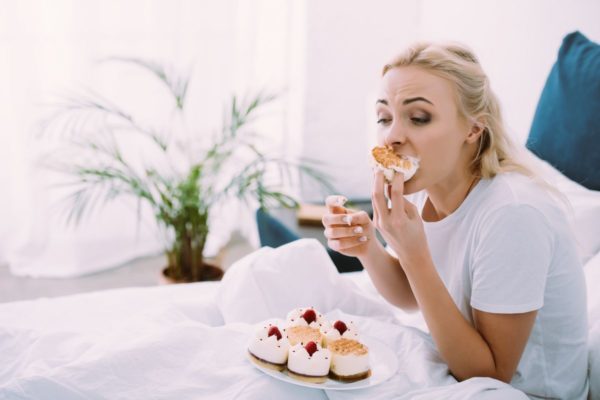 A bright spot is that people who are serious and committed can overcome ingrained bad eating habits.

Trying to talk yourself into reaching for just five or six M&Ms instead of the entire bag the next time you feel stressed and anxious? How about aiming to reach for a cookie instead of a cupcake when you get home, frustrated and exhausted? (And the stress of the holiday season is not helping matters.)

Any rationale for coping with and overcoming unhealthy eating habits — especially over-eating high-fat, high-sugar and highly processed food as a stress reliever — requires a full-scale change of mindset, desire and behaviors, experts say.

“Stress eating is poor stress management,” says Sylvia Herbozo, Ph.D., an associate professor of psychiatry and surgery and director of the Body Image and Eating Behaviors Lab at the University of Illinois-Chicago’s College of Medicine.

“Breaking the link between stress and eating as a relief from stress is the way to go,” she said.

How is that possible, especially after a lifetime of what experts call “emotional eating?”

The first step is to recognize that emotional eating — stress eating and binge eating — springs from psychological underpinnings. It often starts at a young age, especially if children turn to food for comfort and then eat poorly — snarfing potato chips for breakfast or downing soda pop for lunch and dinner.

It’s a serious issue because 16.2 percent of Illinois children ages 10 to 17 self-report as obese, compared with 15.8 percent nationally, and 31.8 percent of Illinois adults are obese, up from about 28 percent five years earlier, according to a 2017 study by Trust for America’s Health, a Washington, D.C.-based non-profit that advocates for wellness and disease prevention.

Children’s body mass index is calculated differently than adults, and is based on how the child compares with his or her peers in age and gender. Adults deemed overweight have a body mass index of 25 to 29.9; those considered obese measure BMI of 30 or higher.

As University of Chicago Medicine nutritionist Courtney Schuchmann explained, high-fat, high-sugar foods release dopamine in the brain and “light up the reward center — the feel-good part of the brain.”

At the same time, it’s more likely that people who are overweight and obese are stress eaters. And abdominal fat itself increases cortisol, which in turn makes you want to eat high-fat, high-sugar foods.

“It’s a feedback loop,” said Schuchmann, who works with patients who require weight and diabetes management, among other diseases, in UChicago’s section of gastroenterology, hepatology and nutrition.

To make the dilemma even more excruciating, fast food and unhealthy, highly processed foods are everywhere.

Stress is ubiquitous, too.

Millennials ages 22 to 39 reported the highest level of stress — 5.7 on a 10-point scale — in a November 2017 survey of nearly 3,500 U.S. adults conducted by the American Psychological Association.

For Boomers and Gen Xers, stress levels decreased slightly from the year earlier (2016), to 3.9 on the 10-point scale (from 4.1) and 5.3 (from 5.4), respectively. Each generation’s stresses differed, with healthcare the most likely source of stress for Gen Xers (47 percent) and Boomers (49 percent).

Both Herbozo, a Latina originally from Miami, and Schuchmann, a native of German descent from Roselle, led active lifestyles growing up, and both saw their teenaged peers go to extremes of eating disorders.

“At that time, I knew very few people in my Latino culture” focused on their appearance, Herbozo said. So she was surprised when she first overheard women in her college dorm force themselves to vomit and others compare their bodies to others’.

“I was shocked, and that led me to wonder, ‘Why would someone engage in such negative behaviors?’”

The experiences influenced Herbozo to pursue research in body image and eating disorders.

A bright spot is that people who are serious and committed can overcome ingrained bad habits.

Schuchmann and Herbozo suggest starting with small steps, such as eating one more vegetable each day or eating fruit instead of candy or baked goods.

“You can allow yourself to have sweets — as long as it’s not associated with how you cope with stress or other emotions,” Herbozo said.

Schuchmann said that might mean planning to eat a sweet treat — let’s say a Reese’s peanut butter cup — on Friday and Saturday nights rather than every night of the week.

Parents need to take on the responsibility of being role models for their children, helping them learn to cope with stress in a healthy way, Schuchmann said. It’s important they prepare meals at home and sit down as a family to talk about emotions, feelings and the day’s events while eating.

Parents and guardians should also encourage kids to be physically active to feel their best — not just as a weight-loss tool, Schuchmann said.

Teens should talk with their parents about foods that could trigger a binge.

“If your parent is bringing home chips every day as a ‘show of love,’ but you think it’s contributing to your poor dietary behaviors, have an honest talk,” she said. The goal is to pursue healthier options.

For young people active on social media, it’s key to have positive peer groups rather than focusing on unrealistic, perfectly curated body images.

“Set aside a specific amount of time each day for scrolling social media, but also set aside time to work on personal development by listening to motivational podcasts or reading books,” Schuchmann said.

“Studies show it takes 21 days to develop a habit,” Schuchmann said. So it’s going to take time to break that habit, especially if it’s deeply ingrained.

“I don’t believe in diets,” Herbozo said. “It’s about a lifestyle.”