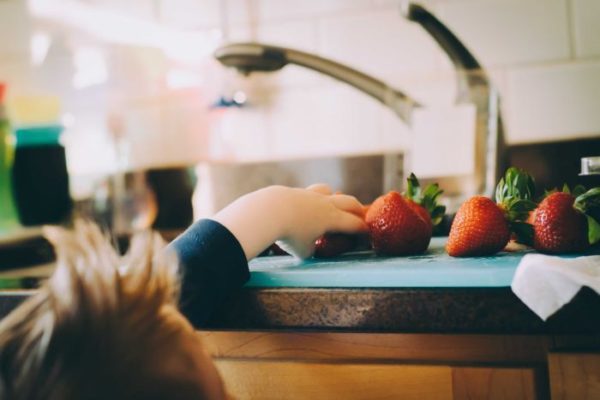 By Fiona Pepper and Joanna Crothers for Life Matters

Photo: Do we need to rethink the way we talk to our kids about good nutrition? (Unsplash: Kelly Sikkema)

Related Story: See what’s inside kids’ lunch boxes — in one of our richest suburbs and one of our poorest

Related Story: Can’t get your toddler to eat? We asked a parent of six and the experts

Related Story: Are your kids picky eaters? Looking back in history might explain why

It can be a struggle to get your kids to eat healthy food — let alone enjoy it.

Many parents resort to clever recipes with hidden vegetables, so kids don’t even know the delicious meal they’re eating is also good for them.

But maybe, says food writer and former teacher Alice Zaslavsky, we’re going about it all wrong.

She says a better approach is one that focuses on “cultivating curiosity” — and teaches kids more about food than “apples are good” and “lollies are bad”.

The first step, she says, is to drop the word “healthy” entirely.

“The first thing we think about when we talk about food to kids is the word ‘healthy’ and the first place that I want to start is to suggest that you remove that word,” Ms Zaslavsky tells RN’s Life Matters.

“That’s got a lot to do with the way we were spoken to about food … and it didn’t work for us, so why do we expect it to work for our kids?”

Ms Zaslavsky’s approach instead focuses on getting children to engage with the “world of food” and sparking their curiosity.

“This is trying to spark conversation that goes beyond ‘eat this because it’s good for you’, which is a really passive conversation to be having,” she says.

For example, rather than telling your child to eat an apple because it is healthy, you could tell them interesting facts about the fruit — that they’re “part of the rose family”, or that they “grow their own wax and that protects the fruit”.

Or: “Have you thought about the volatility of onions and the fact that there are volatile compounds in an onion and that’s the reason that they make you cry?”

Ms Zaslavsky says engaging with your kids in this way gives you “an opportunity to connect over new ideas”.


Here’s what experience and experts suggest to get your child to chow down.

“Slowly but surely what you’ll find is the foods become familiar, because the exposure has happened,” she says.

“Exposure doesn’t have to mean in the mouth, in can mean check it out — just let them touch it or smell it.”

And if they still won’t bite on something new, Ms Zaslavsky suggests offering them “a pea-sized amount on the edge of a plate of everything else that is familiar”.

Talking about nutrition in the classroom

And this isn’t just a conversation for the home.

Ms Zaslavsky believes our approach to food education in the classroom also needs a refresh.

“Rather than teaching food in isolation, it’s time to embed it within every lesson because there’s maths in food, language in food,” Ms Zaslavsky says.

“Even a conversation around native food is really relevant for Australian students.”

She says the classroom provides the perfect opportunity for children to learn more about nutrition.

“Kids are already [willing to learn] in the classroom much more so than when they’re around the dinner table,” she says.

However, she says what kids are being taught to cook doesn’t often equate to healthy eating.

For example, Alice remembers being taught in school how to make coconut macaroons and chocolate rumballs.

She also believes teachers need better support when it comes to approaching subjects like home economics.

“Home economics class is the general expectation of what schools teach,” says Ms Zaslavsky, herself a former teacher.

“But many schools don’t have kitchens anymore and you’ll be surprised to know that there are very few home economics course for teachers to take at university.”

Taking the pressure off

While most of us know the basics of good nutrition, Ms Zaslavsky says it’s important to remember that food is highly emotive for most people.


Before the 20th century, children didn’t have a chance to be picky eaters.

Some parents could benefit from a slight tweak to how they talk about food.

“I find myself accidently saying ‘isn’t this cake going to be great?’ and instead of that, why don’t we reframe that conversation and say, ‘isn’t this caramelised onion or broccoli going to be delicious?'” she says.

Ms Zaslavsky says you should also be wary of passing any negative perceptions of particular foods onto your children.

“These days a lot of the language around food is very fear-based … all of that sort of language applies a moralistic, values-based context to food,” she says.

“For kids who don’t have that grey area yet — they see things in black and white — it can really make kids afraid of trying new things.”

Ms Zaslavsky says whatever the approach to nutrition, it’s important that parents also “take the pressure off themselves”.

“I feel like all of the narrative that we’re told is that ‘we’re never good enough’,” she says — and that applies to nutrition, too.

“I think school lunches have become quite performative — what are you putting into your lunch today that somebody else can see?”


Life Matters is here to help you get a handle on all the important stuff: love, sex, health, fitness, parenting, career, finances and family.

If you’re struggling with lunches, Ms Zaslavsky suggests you remember that it’s just one meal of the day.

It doesn’t have to be “nourishing them all at once”, she says, “you’ve got dinner and breakfast for that”.

And if, at the end of the day, “your child is the sort of person who would prefer to eat the same thing day in, day out,” Ms Zaslavsky says, “that’s perfectly fine”.

“You don’t have to reinvent the wheel every day,” she says.

“We want them to have open minds and open hearts, not be hiding away.”

RN in your inbox

Get more stories that go beyond the news cycle with our weekly newsletter.