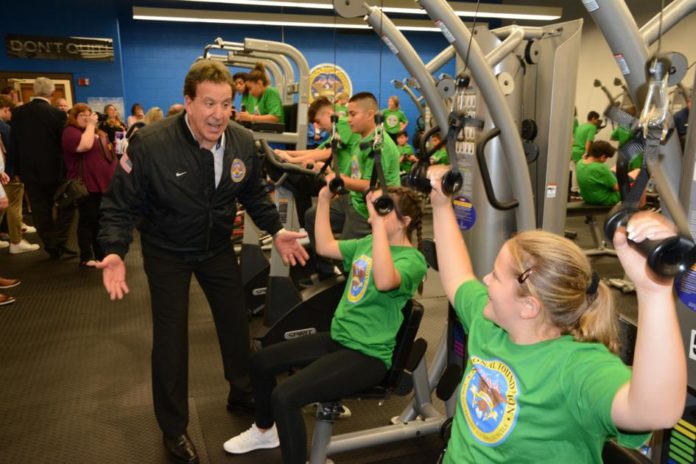 Watch the ribbon cutting here with video of the transformation of the schools and remarks from Gov. Beshear, Steinfield and leaders at each school.

“This has been an extraordinary year. Even though COVID-19 impacted the school year, our DON’T QUIT! campaign received an overwhelming response from schools around the great state of Kentucky.  We had many exceptional entries this year, but three schools really embodied our mission of building a nation of the fittest, healthiest kids in the world,” said Steinfeld. “Because of the exceptional students and staff who are excited to make fitness a daily part of their lives, the National Foundation for Governors’ Fitness Councils is awarding Stuart Academy/Frost Sixth-Grade Academy, Hiseville Elementary School and Wurtland Middle School with new fitness centers that will have a lasting impact on kids and their communities now, and well into their future. Congratulations to these three schools and to every school that participated in the campaign. We look forward to our DON’T QUIT! Fitness Center ribbon cutting ceremonies later in the year.”

This year the NFGFC program will have completed 36 states and will make its way into all 50 states in the coming years. Each fitness center is financed through a public/private partnership with companies like The Coca-Cola Company, Anthem Foundation, Wheels Up and Nike, and does not rely on taxpayer dollars or state funding. TuffStuff Fitness International provides all the fitness equipment, which is manufactured in the United States.