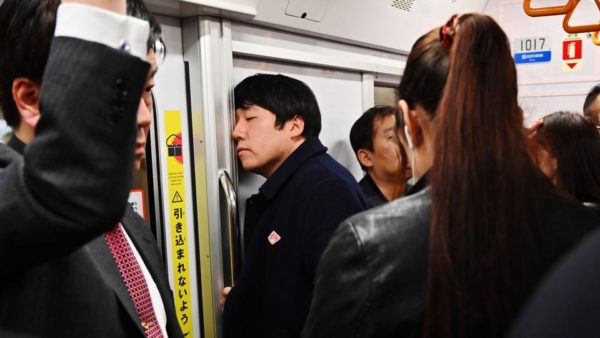 It’s three o’clock in the afternoon in Tokyo, and businesspeople across the city are bouncing between meetings outside the office, sneaking in breaks before heading back. Crouched over small tables in coffee shops with their faces down over their laptops, eyes glazed over, they eventually nod off. People are so tired, sleeping in cafés like this is commonplace. A couple of hours later, those lucky enough to get seats on their cramped train journeys back home shut their eyes again as soon as the train starts moving.

But no one around them bats an eyelid. Known as ‘inemuri’, drifting off in public has become synonymous with exhausted workers. However, tolerance of these frequent sightings of inemuri is contributing to the country’s chronic sleeping problem.

“It’s so easy to fall into it after an exhausting day at work,” says Takanori Kobayashi, whose sleep schedule was so wrecked by his former job as a businessman that he quit. Then he founded NeuroSpace, a start-up with a mission to implement sleeping programmes for companies. “What I didn’t realise until recently was how much it was damaging my quality of sleep overnight.”

Japan has the shortest average sleep in the world, according to 2019 OECD statistics (Credit: Getty Images)

OECD statistics, in its 2019 Gender Data Portal, reveal that Japan has the shortest average sleep in the world at 442 minutes per day a year – approximately 7.3 hours a night. South Korea also scored low at 471 minutes, whilst many countries averaged more than 500 minutes (8.3 hours) including Britain, France, Spain, the US and China. A new law capping overtime came into effect in Japan in April 2019 to combat the culture of long working hours that has contributed to workers’ short sleep cycles; the new law limits legal overtime work to 45 hours a month and 360 hours a year.

But companies have also begun taking matters into their own hands, encouraging employees to go for a ‘hirune’ – which literally translates as “lunchtime sleep”. At the headquarters of GMO Internet Group, a Tokyo-based company that provides services like web hosting, strong scents from aromatic lavender oil fill an unused conference room during lunch breaks, aiding the employees who occupy most of its 27 beds to sleep.

“What we encourage here is not inemuri,” says Sae Takahashi, the group’s chief spokesperson. “With hirune, one is consciously making an effort to rest within a short space of time. This way, we think they can effectively switch between business and break times, creating a better working environment.”

Called GMO Siesta, the facilities are available every day from 12:30 for an hour. “The habitual aspect of hirune is similar to the concept of siesta,” Takahashi continues. “Some use the room as part of their daily routine to help them rejuvenate for the afternoon. For those with children, it helps them catch up on sleep that they may otherwise miss out on at home.”

‘Karoshi’ – the Japanese term for death from overwork as a result of sleep deprivation – has frequently made headlines in recent years.

In 2013, a 31-year-old political reporter at Japan’s national broadcaster NHK suffered heart failure and was found dead in her bed, holding her mobile phone. She had died from working 159 hours of overtime and only getting two days off a month. In 2017, advertising agency Dentsu was fined after a 24-year-old employee jumped out of a window after tweeting: “I’m going to die. I’m so tired.” Its CEO resigned.

For Kobayashi, lack of sleep became a catalyst to quit his job and run NeuroSpace. “When I graduated and started my career as a salaryman, I entered a terrible cycle,” the CEO says. “I couldn’t stop thinking about the pressures from my older colleagues when going to bed, which meant I couldn’t sleep much. The next day I would worry about my lack of sleep on top of the stress of work.”

“The factors affecting the stress kept multiplying, to the point where it was affecting my ability to perform well on the job. The lack of colleagues myself and others could turn to for support was evident.”

Since 2014, NeuroSpace has worked with more than 70 companies in Japan to advise companies on implementing sleeping programmes to boost employee productivity. After a slow start, almost half of those clients have come through since the start of 2019.

Known as ‘inemuri’, drifting off in public has become synonymous with exhausted workers in Japan (Credit: Getty Images)

“The crisis around karoshi has created a sense of urgency among companies to do something about it,” says Kobayashi. “From a business point of view, I always knew there would be a need for this. But I never expected such a rapid interest and shift of attitudes that has occurred over the last couple of years.”

Although companies are now legally obliged to limit overtime hours, NeuroSpace’s programmes include monitoring sleeping habits as part of a wider change of working culture that meets demand for a better work-life balance. “Building rooms in offices to accommodate ‘kamin’ – or power napping in English – at roughly six hours after an employee has woken up helps prevent [inemuri]. That’s around lunch time for most people,” explains Kobayashi.

Despite increasing awareness, there is still a long way to go. “The other day I visited an office block near Tokyo Station and found ‘no sleeping’ signs in toilet cubicles,” says Seiji Nishino, director of the Sleep and Circadian Neurobiology Laboratory at Stanford University. “It was an absolute shock. Instead of spending money making these signs, it would make sense to invest in nap rooms that can be accessed by employees of various companies based in the same building block.”

Nishino refers to the concept as “sleep liability”, which he coined in his 2017 book The Stanford Method for Ultimate Sound Sleep – a book written for Japanese readers.  “The lack of sleep itself is not the problem,” Nishino explains. “Rather, it’s about the damage it causes on the human body. It requires several times the missing hours of sleep for it to recover.”

As an academic based in America for more than three decades, it wasn’t in Nishino’s plans to write a book for the Japanese mass market. But his publishers had identified an audience before the word ‘karoshi’ was popularised; there was already a sense of urgency among shift workers to solve sleeping issues following the death of a bus driver who crashed into two trucks as a result of suffering from sleep apnoea. The driver had been on overnight shifts in the run up to the 2011 accident and could not prevent the disaster despite taking turns at the wheel with a substitute driver.

In the same year, epilepsy sufferers with driving licences caused accidents, which led to a revision of laws that punished drivers with up to 15 years in prison for concealing conditions that affected the safety of passengers. The laws, which went into effect in 2014, also banned those suffering from a lack of sleep as licenced drivers. Since 2015, the Ministry of Land and Tourism has become proactive in preventing sleepiness among those working in the railway industries.

Improving knowledge among workers to approach sleep as health maintenance is something experts at the Japan Organisation for Better Sleep have been trying to implement. “We’ve always had students from those working in the railway industries since we started in 2006, but nowadays almost half of those attending lectures are from that field,” says its chairman, Shuichiro Shirakawa.

“There is an expectation that more corporate companies and their workers will take part. As there isn’t enough education around sleep science and sleep disorder in Japan, I think knowledge about sleep among industrial physicians and staff at health care centres is lacking – the reality is they’re only just getting to grips with it now.”

But for hirune to become habitual, there is a need to start young. “Traditionally, children used to nap at school during lunch breaks. That practice has faded over the last few decades, which has contributed to the lack of practice among adults,” Nishino says.

Last year, Meizen High School in Fukuoka prefecture made headlines after twice as many of its final year students were offered a place to study at the University of Tokyo – Japan’s most prestigious institution for higher education – from the year before. With children exhausted from the stress of extra lessons and homework from cram schools in the evenings after normal high school hours, their key to success was adopting a 10-minute nap time after lunch just before the start of their fifth lesson for the day.

In the city of Osaka, local authorities have been collaborating with Osaka University to monitor and analyse sleeping habits among primary and secondary school students across the prefecture as a measure to start educating them on their sleep. By January 2019, 6,000 children had taken part. The researchers found that 15% of students who claimed they were not tired at all got an average of 8 hours 43 minutes of sleep a day, and the 16% who said they were extremely tired were sleeping an hour less on average.

With the added help of gadgets and products designed for better sleep – known as sleep tech – it’s this collection of data that will also determine the effectiveness of hirune for working adults in years to come. The numerous apps available on the market are already being used in conjunction with corporate sleeping programmes.

“In an ideal world, we wouldn’t need to depend on technology to help us monitor our sleep,” NeuroSpace’s Kobayashi says. “But in order to help us get there, these are the steps we need to take in order for this to become a natural habit again.”