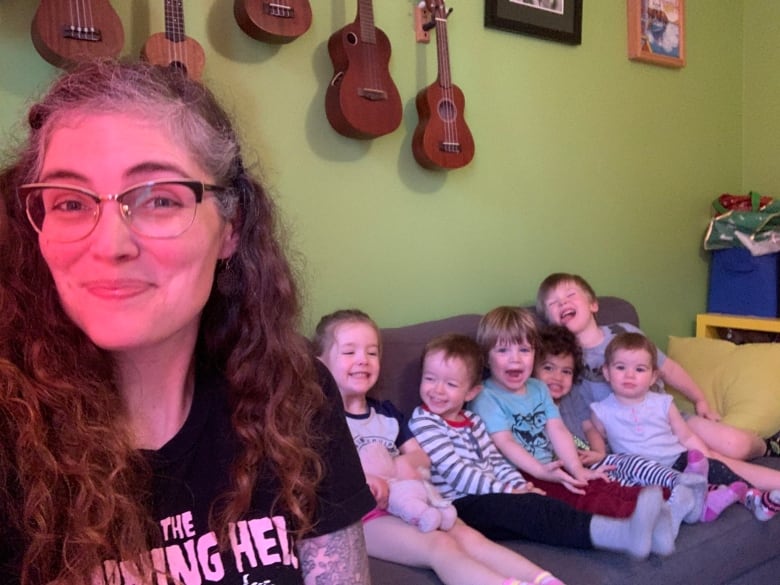 Ally Baird wears a lot of hats in the run of her working day.

She’s a janitor. A chef. An accountant. All while carrying out a curriculum of play- and art-based learning for the six kids in her care, which can include everything from going over the alphabet to goofing around with ukuleles.

“People don’t understand, generally, family child care and what that entails,” said Baird, who runs Little Sprouts Family Childcare out of her home in St. John’s.

Baird’s daycare is regulated by the provincial government, meaning she abides by a slew of rules and regular inspections. She manages those things, parents’ paperwork and the occasional temper tantrum, all while dreaming up and implementing a curriculum similar to a daycare centre, except with a staff of one.

Across the island, in Corner Brook, frustration with a similar lack of understanding with what early childhood educators (ECEs) actually do can be found at Stepping Stones Daycare.

“We are not just babysitters. We’re professionals,” said Kelly Piercey, the administrator at Stepping Stones.

Piercey and Baird say this attitude is pervasive, despite their qualifications — Baird is a Level 4 ECE, the highest certification, combining a university degree and college diploma. It’s an attitude that has changed little over the years even as demand for their services continues unabated.

But assumptions about their work goes deeper than simply a sense of self-worth.

The “babysitting” myth points to systemic issues facing people working in the child-care sector — from low pay to high turnover — that are coming to the forefront as the provincial government’s promise of $25-a-day daycare looms on Jan.1.

Critics feel the subsidy will not be enough to fix what is already a fragile and fragmented system.

But first, a little history

Child care in the modern era evolved with the women’s movement, as a way to boost workforce participation, and as such was initially viewed and compensated as a form of babysitting, according to Emis Akbari, a professor of early childhood education at George Brown College in Toronto, and senior policy fellow at the University of Toronto’s research centre for childhood development.

But the field has shown the importance of a child’s early years, and an emphasis on education based in play has become better understood.

Reports show early childhood education improves the lives and futures of children from disadvantaged families, helps intervene early with learning disabilities and other potential roadblocks, and boosts literacy and numeracy rates in all children.

Making that happen requires more than just a babysitter.

“There’s a lot of public education that has needs to be done around the role of an early childhood educator,” said Akbari.

“That they are experts in early development and education, and they are there to support the learning. They deliver a curriculum, support children and families, and it is beyond what we would call just child care.”

But ensuring that quality of education cannot happen without the people — overwhelmingly women — carrying it out.

“The workforce is a vital piece of that quality. We have to pay attention to the workforce. A well-supported, well-compensated workforce is key to quality in ECE settings,” Akbari said.

Baird used to work at a centre in St. John’s. She loved the job, but on less than $35,000 a year, when she had her first child, she faced a big cash crunch.

“When I was on mat leave, doing the math, I would not be able to afford infant care for my daughter if I maintained my position at that job, even though, you know, it’s like the best paid centre in the city at the time,” she said.

That was 15 years ago, and Baird opened her own day home to continue working in the field. Sometimes she still checks job ads just to see what the going rate is, and been dismayed to see little improvement.

The provincial government offers income supplements to qualified ECE workers, and even increased those amounts in 2019. That tops up salaries with a maximum of $12,900 to $15,400 a year, and bursaries are available to help recent graduates in the field as well.

But Piercey said that still doesn’t make staying in the field attractive, or entering it in the first place.

While she has a core group of dedicated ECEs at Stepping Stones, Piercey said there’s also a chronic staff shortage, as regulations require strict caregiver-child ratios.

“We need more staff. Right now, our daycare is at capacity, with the staff that we have. If we had more staff, we could have more children,” Piercey said.

Stepping Stones will have $25-a-day daycare in January, and Piercey said with the demand there, she’d like to be able to offer it to more parents.

But finding staff isn’t as simple as putting ads up when few people apply, or stay for long, particularly when she has to compete with a government-funded daycare down the street that offers higher wages and benefits.

“You cant fault someone for leaving, to go somewhere where they’re going to get paid more,” Piercey said.

A clear need in N.L.

It can be stressful to struggle with making ends meet while working full-time, said Baird, and that affect ECEs, sometimes trickling down to their workplaces and the children in it. And it’s clear working with children — not money — is the motivating factor for the educators.

“Nobody is doing early childhood education and is a millionaire,” Baird said.

“That’s not how this works. But ECEs that go into the program do it because they love working with children. They want to better educate our province.”

The province clearly needs their services.

We absolutely must move towards a universal model.– Emis Akbari

Demand is high, with about 20,000 children below kindergarten age in Newfoundland and Labrador, and only 8,100 regulated child-care spots. In a province with aging demographics and a shrinking population overall, accessing child care can play a big decision in retaining young families, or attracting them to move here.

The pandemic thrust the importance of child care into the public eye, as parents of children of all ages scrambled to cope, educate and hold down their jobs when the COVID-19 lockdown hit Newfoundland and Labrador in mid-March and all regulated daycares were ordered to close.

Stepping Stones reopened to care for children of essential workers on April 27, and Piercey recalled the nervousness among her staff as they returned to work with young children.

“They’re putting things in their mouth. They’re drooling, they don’t have a very good sense of social distancing, which children really shouldn’t have to — they’re children,” she said.

That nervousness came coupled with a slight dismay months later, she saw public outcry over back-to-school and the wide discussion about how to do so safely, for both children and teachers.

“I understand the teachers being concerned, absolutely. But in saying that, we’re the forgotten group, the early childhood educators. Because we’re here, with the younger children,” she said.

Urging for a universal model

With COVID-19 reinforcing the necessity of child care to the economy, the overwhelming majority of people in the sector say the current system just doesn’t work.

The regulated field is a mix of for-profit and non-profit businesses existing alongside each other, a patchwork of subsidies, with the people working within it often dependent on the government income supplement. Overall, it’s complicated, confusing, and with gaps and cracks that are hardly unique to Newfoundland and Labrador. The same problems persist across the country.

Baird would like to see all ECEs earn a living wage, but said that’s really the tip of the iceberg.

“This is just one small aspect of an entire system that really needs to be overhauled completely and looked at in every dimension. The government doesn’t seem to be doing that, they just kind of throw money at us once in a while and hope for the best,” she said.

“When they’re not addressing the basic parts of the system that are broken, they’re really just going to perpetuate.”

$25-a-day daycare will be funnelled into an existing operating grant program, the provincial government announced Wednesday, with the minister of education saying that method is the fastest way to implement the Liberals promise.

But at that announcement both Education Minister Tom Osborne and Premier Andrew Furey said more needed to be done.

“Whenever any system is broken, you have to start somewhere. And this is a first step in reinvigorating a bigger, bolder idea with respect to child care,” Furey said.

Akbari, who has compared child-care in jurisdictions across Canada, noted Newfoundland and Labrador has boosted its spending considerably in the sector in recent years.

But the field is a complicated tangle of many moving parts — from parents’ and workers’ needs, to lopsided regulatory oversight, to the child at the very centre of it all. That makes any emphasis on improving one aspect of it difficult to boost the system overall.

“We absolutely must move towards a universal model,” Akbari said.

Federal support has to play a role in that, said Akbari, and as the federal Liberals announced plans for increased investment in the sector in its throne speech last month, she was “excited and nervous” that perhaps strides could be made.

“We spend, as a country, significantly less on the early years than we do once a child enters school, across the country, by a lot. It’s not a small difference,” she said.

“When we know that the early years matter the most, we know that it sets the foundation for lifelong learning and success, why are we investing so little in these years, comparatively?”

From her crowded corner office in Stepping Stones, Piercey said she sees the importance of what her staff are doing, every day.

“We do have the most vulnerable little children, and you know, a lot of times you’re working for minimum wage,” she said.