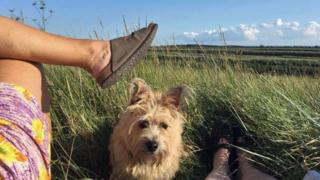 The first rule of self-care is to find time for yourself. But how do you do that when you have to juggle work and family duties? Easy, says Sue Elliott-Nicholls, just steal it.

When my kids were little I was a great advocate of the skive. It’s still the very first piece of advice I would give to any parent: in the midst of trying to keep everyone happy, your kids, your partner, your work, your parents, steal a moment, just for you.

And I mean steal it. So often, when you have children, time to yourself is bargained for, negotiated, a favour for a favour: “You have them Saturday and I won’t make a fuss next time you want to slope off and watch the football.”

But a skive is a sin, it involves deceit and skulduggery. And therein lies the joy.

When you leave your children at nursery/childminder’s/granny’s, they are all under the impression you are going to work, or to sort out some very important family business… but you’re not. You are having a love affair – with yourself. Who else wants to do exactly what you want to do, on exactly the same day? Eat in the same place, climb the same mountain, go and see the same film as you?

I remember walking in the forest one day with a friend and our tribe of children. One needed the loo, one had been stung by nettles, one had a rogue sock that kept slipping down inside his wellington boot, and all of them were freaking out about the wasps (these are city kids).

My friend turned to me and sighed, “This would all be so much nicer with no children.”

She was right. That was my “eureka” moment.

So the following week, I put them into play scheme and took myself off to the forest.

When I picked my kids up again I felt as if I had been on holiday. As they came skipping towards me I hugged them and almost wanted to thank them for letting me go for a few hours. I harboured a delicious secret, and those few hours away had made me see everything in a new and brighter light.

After that, I prescribed myself one skive a month, and guess what? It made me a better parent.

It can be a walk along the river, a trip to the theatre, a stroll around the shops, or even just a couple of hours on the sofa watching movies, the point is you are doing it just for yourself.

When I first suggest the idea of skiving, people are often horrified – why would they ever want time away from their adorable family? But as time wears on, and the relentless hamster wheel of breakfast-washing-work-stories-homework-tidying-sleeplessness rolls on, they begin to see the benefits of jumping off for a few hours.

When children come on the scene, money and time are closely monitored. How do you justify paying a childminder, for instance, when you are “just” taking time for yourself, away from your family? How do you manage the guilt? But I see it as a mental health day, an early intervention against stress and exhaustion.

And nobody needs to know.

Take my friend Enas – she pulled off a skive in her own home, right under the very noses of her family.

When she had a rare day off work, Enas knew exactly how she wanted to spend it. After handing her three-year-old over to the childminder downstairs, instead of heading out the door, Enas slipped back upstairs and snuck into bed.

Little did her daughter know that while she was playing in the living room, mummy was not at work at all, but hiding under the covers.

“I just decided to hide. I shut the door, nobody knew I was still in the house,” says Enas.

So began a new hobby – one Enas is determined to keep up.

“I watch reality TV on my laptop with headphones in,” says Enas. “If someone’s going to give me the day off, I’m not going to do anything that requires brainpower. I just want to be horizontal.”

Complications can arise when thirst or hunger kick in – going to the toilet requires a carefully planned route, tip-toeing around the creaky floorboards.

“You can’t flush the toilet, you just creep back to the bedroom,” she says.

“Anything you’re not meant to be doing is more fun. You get the adrenaline going – ‘Am I going to get caught?'”

Now, with a new four-month-old baby, Enas is happy to report she managed her first skive as a mother-of-two, just a few hours in bed pretending to be ill while her husband took the kids to the park. It was a small skive – but every little helps.

Elena is a single mum, and runs her own business, which involves driving around the country training hairdressers. After spending all day talking to people, she just wants to be alone. So she uses her time on the road wisely.

“I say I’m stuck in traffic but I’m really at the motorway services, having a coffee on my own because I don’t want to go home,” she says.

“My car is my sanity, my little house, my escape route. It’s like you’re seeing a man on the side, but all you’re doing is enjoying the peace and quiet.”

The only danger is when the phone rings. You can’t not answer if it’s the kids, in case there’s something wrong.

Worse, Elena’s children use FaceTime. If they see her sitting in a car park, with her coffee and her shades on, the game’s up. So what does she do?

Note to self: Don’t introduce FaceTime into the family habits. It was bad enough when my husband once called me when I had taken myself off to the seaside for the day and had to run into the public toilets so he wouldn’t hear the seagulls. Add video to the equation and life gets even more complicated.

If you were terrible enough (as I was) to skive from school, you will understand the joys of sitting in a park in the rain, hiding, while your classmates battle through a cross-country run, splattered with mud and sweat.

The hysteria as we covered ourselves in mud before rejoining the rest of our class at the finish line is one of the happiest memories of my teenage school life. Had we just been in the park in the rain on any other day we would have been utterly miserable – BUT WE WERE SKIVING.

You can of course do a group skive. This is another level of skiving.

When I became a parent we had a yearly date, my friends and I. We would take a day off work and spend it swimming and sunbathing at a swimming pond near where we live. We brought a picnic and laughed as we lay in the sunshine, jumping into the cool refreshing water, imagining how everyone assumed we were at work.

One year, come pond picnic day, my husband was at home with flu. I looked at him, slumped on the sofa, and hesitated for a second, then kissed his sad face and happily skipped out of the door.

The problem was, as I drove home that evening I realised I had put my dress back on inside out. What would he think if I came home from “work” with a golden glow, irrepressible smile, bouncy hair and a dress on inside out?

I pulled over, slid down to the floor of the car and fumbled with the dress until it was once again the correct way round. Did anyone see? Probably, but it was worth it.

My husband has subsequently told me he knew I had the odd skive and he didn’t blame me for one second. Enas is fairly sure her childminder has noticed when she has been upstairs.

“I find I’m so much nicer to my family when I’ve had a chance to view them from a distance. I’m happier, which makes them happy. We are all winners,” says Enas.

“It’s OK to think about yourself. There’s this whole mummy martyrdom, but you don’t have to give up everything.”

Elena also thinks the time she spends in her car makes her a better mother.

“If I’m tired or stressed I can take it out on the kids, and then I end up not being the parent I want to be,” she says.

Now my kids are older I have carried that life skill forward. I have evolved. I have realised there are always situations to skive from – ageing parents, stroppy teens, millennials moving back in, work deadlines, houses that are falling down, friends in need…

We still need to stop the world and get off for a couple of hours.

Once you’ve got over the lying and the manipulation, it’s amazing how easy it becomes.

It’s a shock to many parents – that moment when their teenage children fall out of love with them. How do you move on from that kind of rejection?

READ: From hero to beg-friend