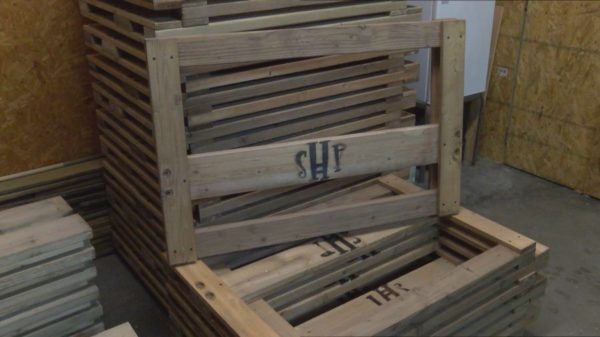 KINGSPORT, Tenn. (WJHL)- A new nonprofit organization in Sullivan County wants to ensure no child has to sleep on the floor.

Sleep in Heavenly Peace is a national organization with over 200 chapters. In 2019 alone, the nonprofit has built 13,000 beds for kids. Sullivan County’s chapter was started in the spring of 2019. Volunteers are now beginning to bring beds into the homes of Tri-Cities children.

“We build and donate bunk beds to local kids that don’t have beds,” said Adam Harber, president of the Sullivan County chapter. “So these are kids that are sleeping in tough situations, like sleeping on a floor, on a couch, or with a family member.”

The group constructs single and bunk bed parts during special build days. Bed parts are later driven to children’s homes and fully-assembled there. Sleep in Heavenly Peace also supplies mattresses and bedding so kids can use beds from the first night they have them.

Harber said he had wanted to volunteer with the organization, but there wasn’t previously a chapter in the Tri-Cities.

Parents are able to submit requests for beds through the Sleep in Heavenly Peace website. On one November night, Harber and several other volunteers delivered beds to a Kingsport apartment, where four children living inside didn’t have any.

Even though the Sullivan County chapter is new, Harber said there’s already a waiting list for beds.

“We think the total need in the Tri-Cities area, the Kingsport area, is probably in the hundreds. We’ve definitely got our hands full,” said Harber.

Assembling each bed, topping it with a mattress, and covering it in donated bedding only takes about 15 minutes. From there, volunteers say each bed will last for years.

“It definitely opens your eyes to a need in the community that you really never saw before,” Harber said.

The Sullivan County chapter said they are need of both donations and volunteers to help with build days. The group can be contacted through their Facebook page, Sleep in Heavenly Peace – TN, Sullivan Co.

Copyright 2019 Nexstar Broadcasting, Inc. All rights reserved. This material may not be published, broadcast, rewritten, or redistributed.