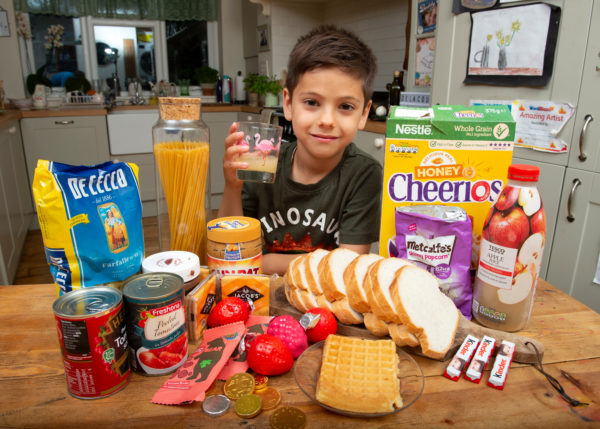 But while the majority of youngsters grow out of the fussy-eating phase, for some it can mean something far more serious.

Last week it was reported that a teenage boy was left deaf and blind after eating only chips, crisps, ham and sausages for a DECADE.

The 17-year-old, known only as Jake, from Bristol, suffered from a condition where picky eating is taken to extremes.

Dr Gillian Harris, a psychologist from the University of Birmingham, told The Sun: “You get a lot of people saying, ‘If that was my child, I’d sit them down in front of something and make them eat it’.

‘IT’S NOT CHILDREN BEING NAUGHTY’

“But parents who have tried this will know it doesn’t work.

“All children go though what we call the neophobic stage when they are aged around two to four, but some will be worse than others.

“Neophobia has a biological function. It’s not children being naughty or trying to control you. It’s a biologically determined behaviour which has a function, ‘I won’t eat that in case it’s poisonous’.

“If something doesn’t look right the child will not eat it. Most will grow out of it by the time they are five or six. They will start to imitate others and to try new foods.”

But for children with ARFID the aversion can continue for many years and even into adulthood.

Dr Harris said: “It’s to do with hypersensitivity with the senses — smell, taste and texture. There are other indicators too. Sometimes you might have a child who is cleaner, tidier and more of a perfectionist.

‘IT’S NOT ANYTHING A PARENT HAS DONE’

ARFID children will have “safe foods” and won’t eat anything else.

Dr Harris added: “Quite often it is hard when you try to move them on from purees to lumpy foods and you may get gagging and vomiting. ARFID children will usually have been more difficult right from the six-month to eight-month stage.

“Parents hide foods and try to disguise them but this makes it worse. I had one case where a mum tried to change the pasta her son ate to gluten free. He wouldn’t eat it, then refused to eat pasta ever again.

“Most children with ARFID will only have ten exact foods they will eat. So not just crisps, but Walkers salt and vinegar crisps. They are loyal to brands and flavours.”

Children with the disorder find it hard to eat with others, as the mere smell or sight of foods they don’t like can provoke a reaction.

Dr Harris added: “It’s genetically determined. It’s not anything a parent has done. I’ve seen parents with four children, three of whom all eat normally but one doesn’t.

“Parents think it is their fault because other parents and teachers make them feel guilty. You should feel no more guilty than if your child has anorexia. This is an eating disorder.”

Weight loss can be a side effect of the condition, but if children are allowed to eat their safe foods they should continue to grow.

Dr Harris added: “If your child has a reasonable range they should be able to eat enough of these foods to keep putting on weight and growing normally.”

ARFID has only recently been added to an official list of mental disorders. There is no data on its prevalence, although one US expert in childhood eating disorders, Prof Keith Williams, believes ARFID is on the rise.

Psychologist Felix Economakis, one of the UK’s leading experts in food phobias, said: “ARFID can have a serious impact on lives, socially, at home, in school and even in their jobs. It’s not just children, I see adults that suffer too.

“Sadly, it is not taken very seriously because of the confusion with fussy eating.

“If you tell a GP, ‘My child doesn’t eat any more and they are losing weight’, they will diagnose anorexia and refer accordingly.

“If you tell a GP your child only eats a limited amount of foods, the GP is likely to say, ‘Don’t worry, they will grow out of it’. The No1 thing to know is that it isn’t a parent’s fault.

“You could be mother of the year, but this is a phobic response. There is no logic to it.”

Here, The Sun talks to three mums whose children have all been diagnosed with ARFID and they tell the problems they have suffered.

‘Therapy’s made a huge difference’

“Louis was a great eater as a baby, but we feared there might be a problem when we tried to introduce new foods when he was three.

Until he was six, Louis would only eat plain, beige foods such as cereal and toast. He liked smooth peanut butter, chicken, yoghurts and milk. He’d only eat fruit that had been blended.

I’d get family members saying ‘If he’s really hungry he’ll eat’, but when a child has this condition they won’t, due to their fear and anxiety around food.

Louis has never eaten a crisp, a chip or potato of any sort and getting him to try new foods has been impossible.

Holidays are tricky. Last year we went to Greece. He can’t stand herbs, but they were on everything, so he only ate chocolate pancakes.

There is little understanding of this condition and I felt very alone. After a lot of research we self-diagnosed Louis – you don’t get any help on the NHS.

We went to see psychologist Felix Economakis, a specialist in the disorder. He explained what ARFID was and how it’s only in the past ten years they’ve put a name to this condition.

One therapy session with Felix has made a huge difference and Louis has been able to expel his fear and begin eating new foods – even a bit of home cooked lasagne.

There needs to be more awareness, it’s not just a child being a fussy eater. Support is there, if you know where to turn.”

BEN MORLEY, 13, lives in Spalding, Lincs, with mum Catrina Smith, 45, a school chef. The family have struggled to get treatment on the NHS. Catrina says:

“Ben was a good baby and ate most things. But when he was around 18 months he had a really traumatic choking experience. After that, he wouldn’t eat for days and I struggled to get him to eat much at all. I took him to the doctor but all I got was, ‘he’ll eat when he’s hungry’.

Everyone would look down their nose at me, presuming he was no more than a fussy eater. Some would say things like, ‘leave him with me for a week, I’ll get him eating’.

I’m a primary school chef. I know all about healthy eating.

Ben has a few safe foods but he doesn’t eat that much of them at all. He’ll have French fries, chicken nuggets, plain or barbecue Pringles, tinned spaghetti hoops and chocolate. But none of them can be on the same plate.

He used to eat plain digestive biscuits, but he’s not had one for nine months now. He has just started to eat half a slice of toast.

You have to remind him to drink all the time. He drinks water. A few years ago he started Coca-Cola and recently began drinking orange juice.

I’ve been back to the GP again as he seemed to be suffering anxiety and chest pains. We found out he was low on Vitamin D and B12, so he’s on medication.

Earlier this year I ended up contacting Beat UK, a charity for eating disorders, and they mentioned ARFID. For 12 years I thought I was a bad mum and that it was my fault he wouldn’t eat.

When I read about the condition, everything made sense and for the first time I felt I wasn’t on my own. I found support and realised that Ben is not the only child going through this.”

The warning signs your child maybe more than just a fussy eater:

MOST READ IN FABULOUS

Queen is ‘hurt and disappointed that Meghan skipped the Highland Games’

‘When he has nuggets they must be McCain’

GEORGE DAVISON, 11, lives with mum Tracy, 47, dad Anthony, 44, who works in IT, and brother Harry, 13, in Norfolk. George has struggled to eat since he was a baby, though he was only diagnosed with ARFID when he was eight. Tracy says:

“George was bottlefed as a baby but he even struggled with milk. When he was about nine months old he stopped drinking it altogether.

Weaning was a struggle. He’d only eat puree, with no lumps or texture, and by the age of four all he ate were purees and baby pasta.

My health visitor told me he would eat when he was hungry, but I knew he wouldn’t. If I didn’t give him these foods, he’d wake at 3am starving. No one understood. They thought George was a fussy eater and that I didn’t know what I was doing.

If I wanted to take him to the sweet shop for a treat, he’d stand there for ages but there was never anything he wanted and we’d go home empty-handed.

Birthday parties would be a nightmare. I had to take my own food for him. When he was six we managed to get him on French fries and chicken nuggets, but can’t just go into the supermarket and buy own-brand nuggets, they have to be McCain.

George started eating a meat feast pizza about 18 months ago and grapes are also a safe food. School lunchboxes have always been tricky.

A previous primary school George attended was not always understanding. If he ate a bag of crisps, I felt he’d done well.

The school would say I couldn’t put this in his lunchbox and that I had to give him fruit. But if I did he wouldn’t eat anything. He lost weight and had no energy.

George was about eight when I did some research and went to an eating disorder clinic in Birmingham. He was diagnosed with ARFID and we were advised not to restrict him on the foods he does eat.

We were told not to force feed him or to make him sit at the dining table, as that added to his stress. It was the opposite of everything we’d been doing.