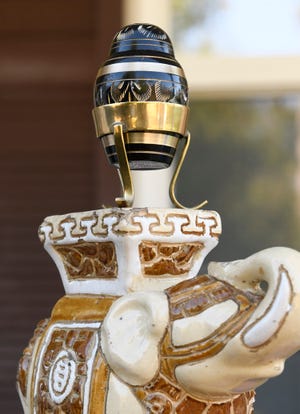 CANTON  — Three months have passed since bullets tore through a southwest Canton home, ripping through sleeping twin toddlers, killing one and wounding the other.

Now the surviving twin often can be comforted only by holding the small egg-shaped urn that contains his brother’s ashes.

“After it first happened, that’s the only way he would go to sleep,” said the boys’ grandmother, Timeka Torrence. “We gave him his brother’s urn and he went right to sleep.”

No one has been charged with the shooting of ArCel Lucas on July 22 or the killing of his 19-month-old identical twin, Ace Lucas — although their family claims to know the identities of the men responsible.

But Torrence is looking forward to the day the gunmen are punished.

“When these people get caught, I just cannot wait for them to suffer and they are going to suffer. That’s God’s plan,” she said.

Timeka Torrence added: “It’s not going to bring him back, but we want justice for Ace.”

Ace and ArCel Lucas were identical twins. Ace was the firstborn.

His mother easily could tell them apart: Ace’s face was a little chubbier.

The boys did everything together. They laughed and played and stood in front of the TV, dancing together to songs on YouTube, including their favorite, “I Love My Life” by Super Siah. The video stars two small boys, friends who drive fancy toy cars as they sing and dance.

When the song plays now, ArCel looks around, runs to the urn and asks for “bra-bra,” Bria Torrence said, noting that the twins called one another “bra-bra,” toddler-speak for “brother.”

“He definitely shows us that he knows [his brother is not here] and thinks about him a lot,” she said, wiping away tears.

As she spoke, tears fell, too, from A’Launa Lucas, the twins’ 8-year-old sister. She talked about her brother, smiling through those tears, saying, “He always kept a smile on his face.”

A’Launa had been sleeping on the living room floor in front of the sofa where her baby brothers were shot that night.

She escaped harm. They didn’t.

Bria Torrence remembers all of her children playing together at her mother’s home the afternoon of July 21 — hours before the shooting.

Their father, Aaron Lucas, called, asking for his kids to spend the night.

“He always wants his kids,” she said.

Her children hadn’t stayed at their dad’s home on Clarendon for two weeks, she said, “but he was letting them bond with [his new] baby lately.” Aaron Lucas’ girlfriend has a 3-year-old child and an infant who was, at the time of the shooting, just 3 weeks old.

Bria Torrence described Aaron Lucas as a good dad, an attentive father who was “always Facetiming his kids. … He’s definitely calls and checks up on his kids.”

And, she said, “If I knew anything [had been wrong], my kids would not have been over there.”

On the afternoon of July 21, she had dropped off the twins and A’Launa at his home where the children’s toys filled the deck and the front porch, toys that Bria Torrence said the killers later can be seen tripping over in a surveillance video.

Just before 2:30 a.m. July 22, at least three men carrying guns arrived at the house, walking back and forth around the dwelling before opening fire on it.

The bullets pierced the walls, blasting through and tearing into the the toddlers’ bodies as the children slept on their father’s sofa. Aaron Lucas, his girlfriend and the three other children inside — A’Launa, the baby and the baby’s 3-year-old sibling — escaped harm.

The baby’s mother can be heard on 911 dispatch recordings reporting the shooting as a man in the background discovers one toddler with a bullet wound and then, seconds later, the other toddler was also shot. (Bria Torrence said that man was the children’s father.)

One toddler was crying. The other was silent.

Ace, who would have celebrated his second birthday in December, was pronounced dead at 2:55 a.m. at Aultman Hospital, according to Stark County Coroner Anthony Bertin. The child’s death was the third shooting death within six hours in Canton and the ninth homicide to cross their desks this year.

ArCel Lucas, who had also suffered a gunshot wound, was taken to Akron Children’s Hospital. His mother said doctors allowed her to take him home later that day. Although he has recovered from the physical wounds, the boy still struggles with the loss of his brother.

Police have twice released surveillance video, asking anyone who recognizes the gunmen to call.

Crime Stoppers offered a reward leading to the arrest and conviction of anyone responsible for the killing. The FBI later increased the reward, which totals $25,000. And police have since announced that one or more of the suspects may have been from the Chicago area, again asking the public for help.

The child’s family continues to plead with the public to come forward with information.

“Anybody that’s got a heart needs to say something.”

Bria Torrence said she will always remember seeing her son as a happy baby, and she remembers seeing him after he died.

“It was like he was sleeping. I got to hold him. Seeing him that way, my baby didn’t suffer,” she said, wiping away tears.

“I never, ever in my life expected anything like this to happen to me at all. You see it on the TV, you read about it in the newspaper,” she said. “… I miss my other one so much. But I am so happy that I have my two [other children]. It could’ve been way worse. I try to stay happy and positive. I keep my faith, I keep my faith in God.”

But the tears continued to stream down her face.