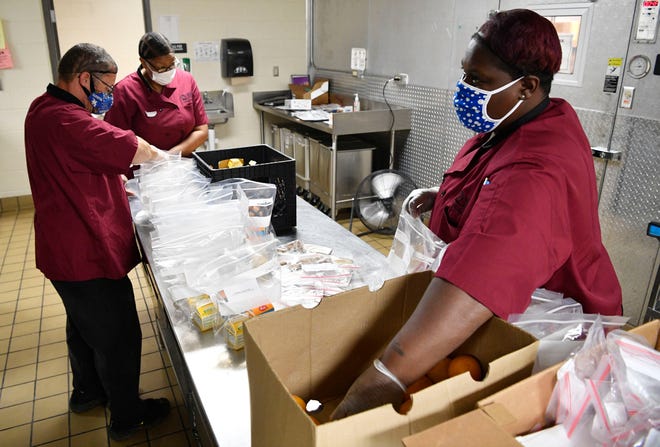 Dean wrote this essay in response to the following question: “Embedded within the U.S. Constitution are principles including but not limited to separation of powers, branches of government, and checks and balances. In an essay of 500-1,000 words, discuss one significant action our government could legally take to address a current area of inequity in the U.S.”

My time as a Metro school student has given me first-hand experience with a serious issue. The regulation that schools must provide students with breakfast and lunch is a good thing, but because of the way that the food grants are written, the schools are buying unhealthy, unappealing, wasteful food that unfairly affects people who do not have meals to take from home.

I suggest an alternative.

With the Executive, Legislative and Judicial branches, we will find a solution to this problem. The federal government should give school districts a grant to contract with farmers for fresh meats, vegetables, and fruits for schools and retrain cafeteria workers to prepare, cook, and clean up after meals, which makes for better quality meals, less waste, and more love behind the food.

A serious problem that our community has involves the unhealthy, unappealing, prepackaged, and wasteful cafeteria food in public schools. Young bodies need to be well-nourished in order to grow, keep learning, and have energy for the rest of their classes.

This issue affects poorer people much more than people with enough money to bring lunch from home because they have no other options for food. Most of the food served is unhealthy: chocolate muffins and Pop-Tarts for breakfast; sugary peanut butter and jelly sandwiches and hamburgers that look green and appear to have the texture of soggy cardboard for lunch.

The packages in which they are presented are made of plastic that is nonrecyclable and piles up everywhere. Dinky plastic utensils, plastic clamshell containers, and weak Styrofoam trays are all thrown away at the end of the meal, which creates a lot of waste.

The fact that there is so much plastic and Styrofoam waste tells us that the food was purchased prepackaged, and pretty much all the school cooks have to do is reheat the food and set out the utensils and trays. Prepackaged meals do not communicate the love and care that a good home-cooked meal can have.

Three ways to ensure children are getting fed healthy meals

Here is what we should do to stop this inequity to those public-school children who need healthy, nourishing food.

First, employees from the school district should make contracts with local farmers to buy fresh fruits, vegetables, and meats on the promise of fair pay. This solution addresses the problem of public-school cafeteria food that is unhealthy and not fresh.

Next, we should retrain cafeteria workers to plan meals, buy the ingredients, cook the food, serve the food, and wash everything needed for cooking, serving, and eating. This addresses the quality of food. This shows the kids that the cafeteria workers, the school staff, the farmers, and the school district care for them in ways that a Pop-Tart just cannot.

Last, we should have communication between classrooms and the cafeteria so cooks know how much to prepare and kids know what food will be offered. Since the school will not be buying prepackaged foods, much less packaging waste will be generated.

We should use reusable trays and utensils that could be cleaned by kitchen staff daily. With two or three compost barrels, the problem of food waste could easily be solved because there will be much less food waste: the meals will taste better so people will eat more; by knowing exactly how many students want what, the cooks would not overdo the ratios of food served.

How the branches of government can cooperate

Instead, the federal government should provide grants for local school districts to contract with local farmers instead of big food companies for fruits, vegetables, and meats.

The Legislative Branch should increase the education budget to allow the schools to buy better food.

The Judicial Branch should assure that the contracts are upheld and review the grant and the amount of money being spent to make sure they are allowed under the Constitution.

The Executive Branch should create the details for the contracts. The Secretary of Health and Human Services, the Secretary of Agriculture, and the Secretary of Education should collaborate to make sure that the meal requirements are optimal for school children and that local farmers do not get cheated.

Checks and balances can be very useful because if we did not have them, this grant could become a major problem. For example, if a senator from Florida wanted to have Florida schools to get more money for food than schools in Tennessee; or if the Secretary of Health decided that the only person who could inspect the food was his brother who just happened to do that for a living, so that the Secretary could influence him and overextend his authority to choose what foods would be served—then checks and balances would take effect.

If the federal government gave public school districts money to buy produce from farmers for a fair price and money to retrain cafeteria workers to cook and clean from the meals, the result would be better tasting, nutritious food that would not come in a plastic wrapper.

This food would benefit the school children, especially those who did not have food to bring from home and have to eat the school food, and result in less waste. Healthy and freshly made food will build strong bodies ready for classes with the knowledge of love that good food gives.

Trane Abernathy is a student at Rose Park Middle School.