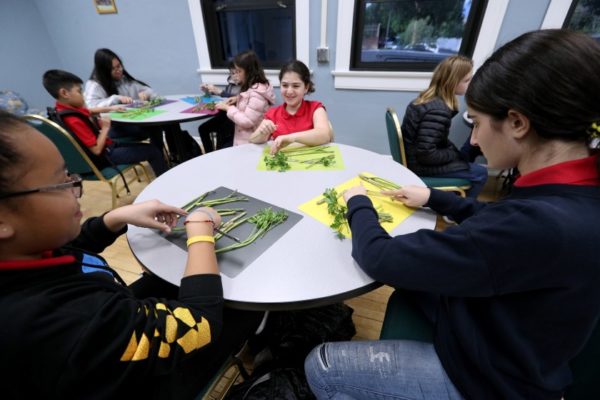 Some of the ingredients placed atop a portable cooking table are common to a kitchen: salt, Italian parsley, vegetable broth and a hot plate.

Other elements found inside Roosevelt Middle School’s after-school culinary workshop were new to such a scene, namely the 20 students taking part in a healthy cooking class funded by the Glendale Sunrise Rotary Club.

The organization is spearheading a six-week project to help some of Glendale Unified’s neediest children.

Rotary club president Alex Parajon said he and other members of his organization had been trying to identify new programs they might provide to the community. “One of the things we decided to look into was the idea of healthy eating,” he recalled.

Parajon filed for a grant with Rotary District No. 5280, which includes 60 clubs from Santa Clarita to Long Beach, to see if he could find a way to fund such a program.

Parajon’s efforts were rewarded as he earned a $2,750 allocation to explore how exactly to bring healthy living to Glendale.

“We at the Rotary thought, ‘Why not teach underprivileged kids how to cook healthy and at the same time go back to their homes, go shopping with their parents and learn how to shop for healthy grocery items?’” Parajon said.

“It’s better than them buying chips and junk food,” he added.

On Halloween — a day known for anything except healthy eating — the Rotarians, Glendale Unified and Hollywood-based chef Santiago Segura embarked on their first class with about 25 Roosevelt after-school students.

“Most of the kids didn’t think the food would taste good,” said Segura, a native of Colombia, who learned his trade in Miami and Daytona Beach restaurants. “They were asking for seconds at the end.”

On Thursday, the fifth of six classes, Segura separated the students into groups of six and seated them at tables with brightly colored red, blue, purple, yellow and green place mats. The goal was to cook fettuccine Alfredo with asparagus.

As students sliced away the inedible lower portion of the asparagus stalks with butter knives and separated parsley by hand, Segura recounted the ground rules.

The first commandment — “don’t talk when the chef’s talking” — seemed more suggestive than strict as students giggled with glee and whispered when frustrated, while a few howled with delight upon completion of a task.

Segura also instructed students to “keep their stations clean,” “be careful with the knives,” “taste your food before you serve it” and “have fun.”

“I didn’t like the cutting,” Roosevelt sixth-grader Suzie Nazlukhanyan said, “but the rest was fun.”

The most interactive portion of the cooking class followed when students combined ingredients.

As asparagus was mixed with shallots, some students crushed and added pepper, some tossed pinches of salt, while others poured in hearty amounts of vegetable broth and Parmesan cheese into the noodles.

The bravest students mixed the noodles and ingredients with tongs, all under Segura’s watchful eye.

At the end of one hour of instruction, preparation, cooking and cleaning, Segura’s class easily made enough pasta for two servings.

“The noodles were the best,” Roosevelt sixth-grader Lyndsey Lopez said. “I didn’t think it would taste good, but it did.”

The response was exactly what Parajon had hoped.

“Our goal is to expand this program through the district, but you have to succeed first with your first group,” he said.

Support our coverage by becoming a digital subscriber.